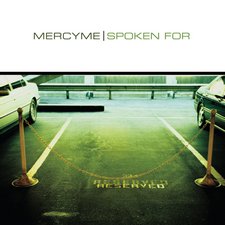 
In 2001, this band from Dallas, Texas named MercyMe released one of the most successful albums in the history of the Christian music industry. The album was titled Almost There and became a huge accomplishment for a band's major label debut. Now the question to ask is "How does the sophomore effor fair?"

Spoken For is certainly more polished than its predecessor, which is especially evident in the smoother vocals from Bart Millard which replaces his squeakier, scratchier, and grittier voice from the debut album. This fits the type of music better as Spoken For contains more pop than their last album. Even though the pop genre seems to carry a negative connotation, Mercyme pulls it off well and still gives it a slight rock edge (but certainly less than the more pop/rock oriented Almost There).

Lyrically, many of the songs talk about what separates us as Christians from the world or our past pre-salvation life. Some of the songs that express this theme are "There's a Reason," "Crazy," "Spoken For," "All Because of This," and "The Change Inside of Me." The cheerful music mixed with the spiritually encouraging lyrics are a great pair.

Even though this album certainly isn't a classic like its predecessor, this is still a good album and very good for a predominately pop album. I would recommend you give this one a spin and enjoy thirty-eight minutes of spiritually-infused ear candy.