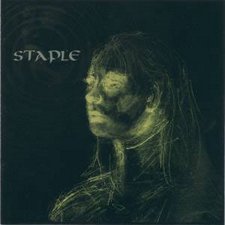 Everyone has at least one obscure band that they love and find fascinating. Often times the band is well under the radar, has maybe one single that was a moderate hit, or has an oddly short-lived career. For me that band is Staple.

In 2002, the band released their first record, self-titled, independently after 2 years as a band. The record opens with an eerie guitar as their frontman, Darin, sings "There's no place to hide from all the truth inside." This theme of absolute truth permeates the entire record. The intro seems to roll right into "Addiction" with a bass-heavy groove, down-tuned guitars and a very simply sung melody often interrupted with rapping and screams. Going into the next song, "Leaving," it feels a little like deja vu with an almost identically sung melody and rhythm, differentiated by some more rap-style vocals. "Face" opens with a very odd jazz style intro in swing fashion, but quickly turns with a very harsh chugging guitar riff that can only be compared to the feeling of gritting your teeth. The song takes several other turns, making it stand out from some of the other tracks.

The next highlight of the record is "Reasons," which introduces a good bit of melody in both the guitar riffs and the singing. It's safe to say that styles used in this song were pursued in the making of their next records. "What I've Got" is one of the closest things Staple has to a ballad in their entire catalog, which is odd on a heavy band's first release. The instrumental melodies in this song have a certain quality of originality that I haven't heard used by anyone else, overlooking some of the odd and not-so-enjoyable singing. The album continues with their crowd favorite, "Good Grief," in a similar vein as some of the other songs, and continues through the record in the same fashion. The disc concludes with a track that's appropriately titled "Truth" in which the line sung in the intro is brought back as a type of chorus next to an acoustic guitar playing another uniquely sounding chord progression. Sounding as if he were speaking in a small room, the album closes with his final spoken words on the topic of truth, ending the record with a dark and reflective tone.

In the early 2000's, rapcore was losing its popularity due to the number of emerging bands mimicking their pioneering influences. Unfortunately, Staple was one of the bands that had joined the nu metal bandwagon. Knowing Staple's latter work, some of the rap-style vocals on this record are almost comical. The melodies in both the guitars and the vocals are often sparse and seem to be clones of ideas used in other songs, making the record seem very repetitive. And being an indie record, the low production quality works against it as well. It's interesting that in less than two years they released another full-length self-titled record, perhaps hoping the repertoire of their newer release would eclipse the older one. Nevertheless, there is a certain spark about this record that few indie releases have. One can see the beginnings of Staple's musical development, and better understand the roots of their sound. While it is nu metal, it does lean toward more of an early Project 86 sound, which was much less common than the standard rapcore act. There are also many moments of surprise and some very truly unique sounds that, as I said earlier, seem to be original to this band. While they would greatly improve their craft in their next releases, I still find this disc, no matter how low-key it seems, to be a sort of musical experience that takes you somewhere, strangely holding your attention until the ride is over. If anything, the record is a nice break from the neatly packaged corporate rock and metal you hear everywhere else.