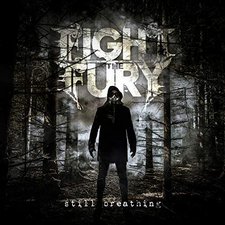 
As Christian rock band Skillet has grown in celebrity and mainstream popularity, so have the cries of fans for the act to return to the sonic composition of the band's golden years. While it may not be exactly what old school panheads asked for, many were pleased when frontman John Cooper announced Fight the Fury, a "metal" spin off project also featuring Skillet alum Seth Morrison. The result is something of a mixed bag, as made apparent on the band's debut EP, Still Breathing.

The EP open with "My Demons," an energetic piece which the band previewed last month. The heaviness of the song is slightly reminiscent of Skillet's Collide album, but some of the lyrics are far too dramatic, nearly to the point of embarrassment: "I go to sleep with my demons / creep in my head every night / they come to shred all my dreams / why, why, why is this my life? / I can't, I can't close my eyes." However, this is easy to overlook when compared to the next track, "Dominate Me," which is outright uncomfortable: "Can't live without you / take me, I need to feel you / this is how you dominate every part of me / yeah, it's okay: dominate me / teach me not to misbehave, I can be a slave."

"Still Burning" is a fantastic song and is easily the saving grace of the album. In many ways, it reflects the general direction that Skillet could have easily pursued after the release of Collide. Lyrically, this song also demonstrates a quality uptick for Still Breathing's weakest aspect. "I Cannot" is a satisfactory offering, although the lyrics "I cannot live; I cannot breathe" harken back to "Comatose" in a manner which more denotes a lack of originality as opposed to an homage. This is only exacerbated by the similarities the next track, "Lose Hold of It All," shares with 2008's "Monster."

Ultimately, the angst of Still Breathing's awkward and overbearing lyrics undermine and cripple what could have been a good offering. The short album offers a fun listen-through or two yet reaches a point of diminishing return all too quickly. For existing fans of Skillet, Still Breathing serves as a fun addition to John Cooper's discography. For those who aren't already enmeshed in Cooper's world, there's little to be gleaned from this release, save for a download of "Still Burning."

As Skillet has gotten a bit softer in recent years, it seems only natural that John Cooper would want to start a side project as an outlet for heavier songs. With five hard-hitting alternative metal tracks, Fight The Fury's debut EP, Still Breathing, is pretty much what one might expect--a slightly heavier continuation of 2000-2006 Skillet (minus the symphonic elements). Prominent chugging guitar riffs, metalcore breakdowns, and the signature raw vocals of Cooper are all on point here, though it feels too comfortable going straight down the middle of the well-worn path of the genre. The lack of creativity, as well as standard (and occasionally odd) lyrical choices, are the only detractors to what is otherwise a thoroughly enjoyable EP. Highlight is "Still Burning" with the rest being similarly good in their own rights. - Review date: 1/18/19, Christopher Smith of Jesusfreakhideout.com