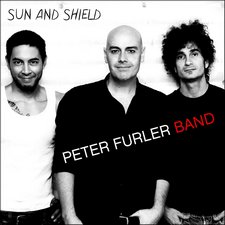 Peter Furler's been a sneaky artist for the past couple of years. With his solo record, On Fire, making waves in 2011, the singer/songwriter played by his own rules with regards to tours and artistry, traveling wherever he pleased and playing with friends from all over (including an exciting drumming gig with Steve Taylor's new project). In the midst of his open-ended obligations and vision comes Sun and Shield, a project from the newly founded Peter Furler Band that few saw coming, but many are rightfully enthusiastic about. It showcases the Furler that fans have come to know and love, while introducing a few new twists along the way.

One of the bigger differences between Peter Furler's solo project and a typical Newsboys project is is that On Fire clearly felt like a self-driven record. Most assuredly, Furler had a certain creative direction that the Newsboys were clearly influenced by, and that influence is still very present here. But now that Furler is two albums removed from his former band, the "Furler sound" is only more solidified on Sun and Shield, and because it feels more like a band-driven album, it carries all the benefits of collaboration. Fellow veterans Dave Ghazarian (on bass) and Jeff Irizarry (on drums) are both fine counterparts to Furler's musicianship, and though there are some aspects of the sound that are more subtle than they could be, the effort does feel more like a full band than Furler's sole tinkering.

Like a trademark Furler release, Sun and Shield has its share of high points that separate from the field in creative ways. The upbeat guitar-driven rockers "So High" and "Dare I Say" are some of the best material on the album, granting Furler, Ghazarian, and Irizarry solid, enjoyable cuts that keep the album fun. "Right Wrong Girl," though an odd inclusion that sticks out from the tracklisting, is a tongue-in-cheek relationship comedy bit that feels exactly like a Furler track from start to finish. The worshipful "Yeshua" is an impactful centerpiece for the album, building to a strong finish that uses the "holy holy holy" chorus exceptionally well. Songs like these make Sun and Shield a novel release, even from a practiced pro like Furler.

With mid-tempo pop numbers everywhere else, Sun and Shield covers all the bases of a usual Furler release, though it isn't a terribly unified approach overall with the album's focus jumping all across the board. There's the unmistakable charm of a Furler album from start to finish, but there's always a nagging feeling that the album isn't much greater than the sum of its parts. Whether it's the safe song structures of "It's All Right (For Lazarus)" and "We Won't Forget" or the largely unexciting methods behind "The Overcomer" and the title track, there's several moments where the album doesn't rise above to convincingly grip the listener. Still, songs like these improve upon additional listens, and there really isn't a bad apple among the bunch.

Furler's fans are undoubtedly happy for an album like Sun and Shield to land. Without too many low points, its a solid record that boasts a nice variety of both quirky and thoughtful songwriting in line with traditional Furler methods. Sun and Shield is not a terribly polished album, but it reminds Furler's fans of why they fell in love with his musical style in the first place. There's an aura of nostalgia that keeps the album afloat, and it's a unique pop effort that keeps 2014 favorably unpredictable.

Peter Furler dropped a surprise on us early in the year with his sudden announcement of the official formation of the Peter Furler Band and the impending first album Sun and Shield. Undoubtedly, this record will be compared to the Newsboys, but perhaps not the appropriate incarnation of the band. Indeed, the sound of this album hearkens more back to the days of the John James-led Newsboys of the mid-90's than anything else. Songs like "So High," "Dare I Say," and "Yeshua" emit a strongly nostalgic flavor that sound like they could be from the hypothetical lost album between Going Public and Take Me To Your Leader. At the same time, Sun and Shield also serves as a natural progression from Furler's solo effort On Fire, with the new record moving away from the more processed sound of his 2011 album towards a more band-driven sound provided excellently by bandmates Jeff Irizarry and Dave Ghazarian. Indeed, the more raw nature of Sun and Shield is the place where it is to be most favored to the more prominent production of On Fire. Lyrically, Furler displays some solid versatility between the more serious material like "Shame" or the consoling "It's Alright (For Lazarus)," the more pop-oriented title track and "The Overcomer," the worshipful "Yeshua," and the downright whimsical "Right Wrong Girl." In all honesty, this isn't the most unified effort I've ever heard, but it is far from disjointed and lacks any significant lackluster effort or filler, and the mid-90's vibe hold it together better than anything else. But simply put, there is a lot to like here and very little to dislike. - Review date: 3/15/14, Mark Rice

One can argue that when Peter Furler left the Newsboys some years ago, he took with him almost everything fans had known and loved about the band. Now back with a band of his own to support him, Sun and Shield captures the quirkiness and sound of 90s Newsboys and beyond as Furler touches on worship but doesn't limit his lyrical topics to just that. From the fun yet romantic "Right Wrong Girl" to the infectious angst of the personal letter to the devil in "Dare I Say," there's a lot of familiar and new ground covered here. And while some songs harken back more so to Going Public (the melody of "Yeshua" is quite reminiscent of "Let It Rain," for example) than Take Me To Your Leader as advertised, Sun and Shield remains a highlight of the spring's new album releases. It's a wonderful reminder of how diverse in style, topics and emotions Christian music can (and used to) be, and a great first effort from Peter Furler Band. - 3/9/14, John DiBiase of Jesusfreakhideout.com

Peter Furler has been greatly missed in the Newsboys. As a big fan of the band's work ranging from the late 80's to the late 90's (and even early 2000's), Sun and Shield is a bit refreshing. It's basically the Newsboys album I've wanted to hear for a long time. With music that seems as if it fits in somewhere between Going Public and Take Me to Your Leader, and some that sounds like it would fit on later Furler-fronted Newsboys albums, the old Newsboys fan in me can't help but rejoice. This may not be the best pop-rock album to come out this year, but it's pretty solid nonetheless. - 3/16/14, Michael Weaver of Jesusfreakhideout.com