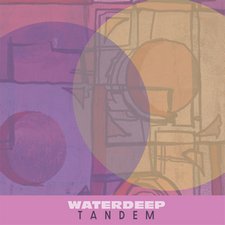 
Waterdeep is one of those bands that has been on the scene for a long time but gone mostly unnoticed. In spite of sharing a record label with Chevelle and Sixpence None the Richer, having a song turned into a hit by Third Day, or being heavily involved with the Nashville music scene, Don and Lori Chaffer (the husband-wife duo behind the group) have managed to stay active on the fringe. That activity has resulted in their latest studio album, Tandem, a stripped-down folk affair that likely gets its name from the way the set list plays out. The Chaffers trade off lead vocals on each song and (for the most part) trade off on who wrote each song. The result is a poignant and thoughtful album of 10 solid tunes.

Lori Chaffer gets the ball rolling with "Know Your Name," a convicting song about the marginalized. In a verse about racism, it contains the brutal lyric, "They say don't make a scene and don't cause a fuss / Just go take your seat at the back of the bus." If ever a lyric was meant to punch you in the face, that is it. "Walking for a Living" shifts gears by simultaneously expressing frustration over making an impact as a creative, but also serving a warning about being too ambitious. "One O'Clock" also serves a dual purpose, relating how suddenly life can change and then seemingly specifying a personal incident. "You Showing Up Here" finds Don Chaffer showing reluctance over keeping up a relationship. Is it between him and God or him and someone else? It's not clear, at least initially. But it does contain another great lyric: "I'm a whale who knows how to avoid a harpoon." "We Made It Out" and "Already Gone" find the Chaffers taking turns reflecting on past relationships that more or less worked out. "Blessing" returns to the realm of songs with dual meaning. On one hand, it asks for blessing on children to grow up kind and loving, but also subtly turns a critical eye on how Christians are showing love in this present age. "This Is Now" tries to focus on the present and move on from the past, using the premise of time travelling as a launch point. The final two tracks, "Over the Snow" and "Half of My Time," are the most poetic and enigmatic of the collection. Especially of note is the latter - a sprawling, somber tune that feels like a collaboration between Don McLean and Leonard Cohen.

The songs on Tandem are all beautifully well-done. Their stripped-down arrangements help emphasize the messages and add to the atmosphere. Indeed, listening to this album, one can tell two master musicians are at the helm. The middle two tracks are maybe the least effective, feeling a little too specific for the average listener to latch on to. Still, they either work emotionally or contain a catchy chorus to linger in your ear. The interesting way the set list is laid out also adds to this record's charm. Lori's songs feel more socially pointed or engaged while most of Don's tracks feel world-weary and disengaged. He seems to turn with "This is Now," but it's interesting to listen to his progression through the run time. Overall, if you are (like this reviewer) unfamiliar with Waterdeep and their work, Tandem may be a good place to jump in. Will it push them out of the fringe? Probably not. But it's a record well worth a listen and a year's-best consideration.