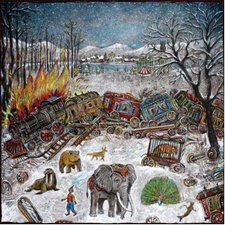 When mewithoutYou released their 2009 album, It's All Crazy! It's All False! It's All A Dream! It's Alright, rumors began to swirl that it was indeed their swan song. The band was silent for a while, but eventually, it got out that mewithoutYou was indeed writing more material for a new album. Without renewing their Tooth & Nail Records contract, mewithoutYou went to work on Ten Stories - their first independent record in more than a decade.

The immediate question fans ask when a new mewithoutYou album is announced is: "What's it going to sound like?" You never really can tell until you listen to it, as the band is well-known for changing it up each time. With the huge difference in sound between It's All Crazy! and Brother, Sister, I decided to not even guess at what Ten Stories would sound like. The band released two tracks before the album's release date, "February 1878" and "East Enders Wives," and they were both pretty different, which really didn't clear anything up as far as the album's overall sound.

"February 1878," an obvious nod to "January 1979," actually starts off sounding like a relative of the song, albeit slower-paced. It definitely has a Catch For Us The Foxes feel. After a couple verses, it winds down into a more melodic indie type of song. The end of the song smoothly jumps into the next track, "Grist For The Malady Mill," which takes many cues from Brother, Sister. Continuing on like one big, multi-part opening song comes "East Enders Wives," which then takes on many It's All Crazy! characteristics. Going further into the album, it becomes apparent that mewithoutYou's new direction with Ten Stories is a backpedaling into what they've done before, but blending it all together in order to make something brand new out of it. Despite the sounds and styles they've taken from Brother, Sister and Foxes, the majority of Ten Stories is melodic. This is probably (but more like "definitely") their most melodic record to date. There is a lot of singing on this record. Aaron Weiss isn't a terrific singer, but if you've journeyed with mewithoutYou through their band tenure, you'll probably be accustomed to it.

Now, of course, there are the lyrics. The music is excellent, but the lyrics are what bring some listeners back album after album. Ten Stories is a concept album. While mewithoutYou albums usually have some sort of concept that is repeated throughout the entirety of an album, this is the first record to actually be a concept album, in the sense that it tells a story from start to finish. And if you check out the album cover, you get an idea of where this story starts: a train crash in early 1878 that gives the circus animals onboard a chance to escape. Weiss goes a few steps further and gives the animals themselves voices and autonomy, allowing them to tell their own stories instead of their stories being narrated. I know this sounds like a kids' book or something, but it goes deeper. Humanity is addressed through the words of the animals who apparently have a new lease on life as they make their escape. The more philosophical listeners may find themselves reading over the lyrics multiple times. (Note: a dictionary of some sort will come in pretty handy, as a lot of 19th century terminology and some people are referenced - I found this one helpful).

With the ever-evolving sound of mewithoutYou, it can be hard to compare one to the other as far as which one is best, which one is favorite, etc. Some people are Brother, Sister purists, while others prefer the rawness of [A->B] Life. If I had to make the difficult decision of how Ten Stories compares with the rest of the discography, I would say that Ten Stories isn't their best, but it's up there. It's a very solid album that I enjoy listening to. Of their entire catalog, it's most similar to their last album, It's All Crazy!, so if that's your favorite mewithoutYou album, this should appeal to you. Even so, it's a great album, and will probably make my top ten for 2012.