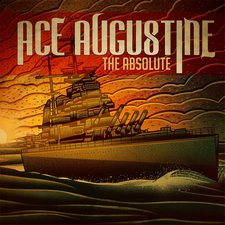 Anyone familiar with Facedown Records will know that the bands they sign are often hit or miss. They appreciate new talent with God fearing sparks in their eyes. Some rise and fall in the heat of an album or two, some end up being For Today or Impending Doom or War of Ages. But there's just little way to tell if a band will flourish or flop. Take Ace Augustine, the Lancaster-local Strike First recruits. They've released their debut full-length album, The Absolute, guns blazing, vibrant with enthusiasm; but just about zero new ground has been broken. They can now go in a number of directions, including: (worst case scenario) they unhinge as a band after one album, like Wrench in the Works did last year; or they could span out and improve, since they actually have potential.

First off, let's get something out in the open. They're your standard metalcore: hardcore influenced, breakdowns left and right (though not to an irritating point like some greenhorns), nothing new to see here. But don't write them off first thing. They never get caught up on one segment of a track for too long. They switch it up enough to keep anyone still listening happy. At times, like in "2013 Looks Promising," they will ease up for a pretty little melodious interlude which careens full tilt into some seriously headbanging sections. There are quite a few places in the album that I was legitimately enjoying myself. They inject enough young energy into the performance that you can often lose yourself and forget that the album isn't actually produced that well.

Admittedly, Ace's biggest flaw is the individual performances. The guitar work occasionally lacks a certain professionalism that time usually warrants. By far, the biggest problem however is vocalist Ben. Besides needing some more practice perfecting his scream, he is essentially monotone. But even this isn't a huge annoyance with the light sprinkling of low screams in a few tracks and the excellent clean vocal choruses in songs like "Negotiations" and "Delorean." Drummer Doug though, is a gem, not taking on any obvious drumming stereotypes in a genre riddled with stereotypes, churning out creative fills and shifting beats.

The band as a whole, on the other hand, is a different matter altogether. They play a stellar team battle; and their writing, while derivative, shows potential for future pizzazz in perhaps a style more unique to themselves. Having banded in the popular musical birthing grounds of Lancaster, PA seems to have had an effect on Ace. Their approach to metalcore resembles August Burns Red in their infancy. That alone substantiates them for further endeavors. They could also be compared to For Today by their hardcore influences and zealous lyrics.

Surprisingly, Ben's vocals are easily understood, which is fortunate since the lyrics are quite easy to listen to. There'll be no wailing and gnashing of teeth, but comforting and encouraging words that, oddly, don't contrast the music as much as you'd think. Especially meaningful lines like "Make your mark this time. There's no second chance. This is not a test. This is your life" are sung fervently in the rush of "Negotiations," an extremely uplifting song when paired with the guitar melody. In the finale of the album, "The Absolute," the line "Bring me to a light of positivity. Bring my mind to where it longs to be. This place is not my own. This body's not my own" empowers the listener through Ben's screams.

In the end, there's no doubt that everything you've heard has been done before, but it hasn't always been done well. Ace puts a lot of enthusiasm and teamwork into an entertaining collage of music, and that wins them a lot of points over the band that's trying so hard to be original that they fail to see that they're terrible. The Absolute is by no means flawless, but it's honest and shows real potential. Hopefully they go down the same path that August Burns Red and For Today did by improving over albums. Assuming they stick it out, Ace Augustine is a band to keep an eye on.

Ace Augustine releases their debut album, The Absolute, on Strike First Records; the release seems to feature a band suffering from an identity crisis. At points throughout the album, they seem to be a hardcore band, at others a faux tech metal band, at times metal-core, and still at other times a simple over-done screamo band. Obvious comparisons would be August Burns Red or For Today (the 1:25 mark of "Axioms" features what feels like a sample of For Today's stuttered vocal effect), but Ace Augustine does not stick to the formula. When the band chugs out hardcore riffs and deeper vocals, the music is at its height, but soon they venture off into some guitar hammer-ons that may lead the average listener to believe they are tech metal. To top it off, they then move on to clean emo-like guitar sections with clean vocals leading into high-pitched screams. In the track "Negotiations," they even try to sound a little death metal with the guitar and drum parts, but the section comes out as a half-hearted effort combined with the rest of the hardcore/emo/fill-in-the-blank track. The two highlights of the album are the drums and the lyrics. The lyrics are highly spiritual and unashamed as evident on the opening track, "Justifiers," when Ben Moser exclaims "for Jesus Christ, my Savior." Doug Fellenbaum's work on the drums is definitely the musical highlight. If Ace Augustine can focus a little harder in the hardcore aspect of the music, which seems to be where their comfort level is, they have a chance to release some quality material down the road. The fact that these guys are extremely young only gives hope that their music has room to grow and improve. - Michael Weaver, 1/14/11