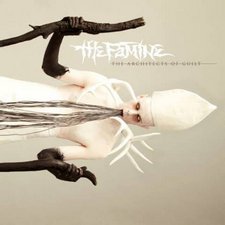 The Famine
The Architects of Guilt

The Famine have been through a lot of adversity over the past few years. After parting ways with lead singer and founder, Kris McCaddon, finding a new bassist, and a studio fire that destroyed their equipment and the early recordings for their newest album, The Architects of Guilt, February finally sees their second Solid State release come to fruition. New lead singer, and former bassist, Nick Nowell, takes the reigns and runs with great vocal range, easily covering the high screams and low growls on his own. Fans of The Famine and Embodyment (Solid State band featuring McCaddon, Andy Godwin, and Matt Garza) were unsure what to think when the split was announced, but Nowell has proved to be a worthy replacement.

Before we get further into the music, I would like to put a disclaimer on this album. Although the band is signed to Solid State Records, this is actually not a Christian market release. JFH is covering the album because they are a Solid State band that expresses their faith in their music. Before his departure, McCaddon described the band by saying, "You can call us whatever you want. We are a metal band and wouldn't label ourselves anything but and honestly don't care what people label us. Our faith isn't forced into our music, nor is it an obligation. It is embedded in the fabric and is who we are." With that being said, let's discuss the metal that is The Famine.

Not that you expect sunshine and rainbows from any band with death metal tendencies (we'll use this terminology because there are WAY too many "metal connoisseurs" out there that will debate if this is true death metal), but this one is dark. The band touches on the evil of all humanity with this release, which is pretty fitting given the title of the record. Nowell screams and growls about everything from Jonestown, Ruby Ridge, the Waco siege, James Byrd (murder victim that later led to hate crime laws being enacted), and the Oklahoma City Bombing.

"The New Hell" kicks the album off with a bang and is easily one of the best tracks. Through heavy guitars, blazing bass lines, murderous blast beats, and the screaming and yelling you will quickly join in for the chorus, "Oh, the horror! A grim thing to behold; hanging by our necks from the Bible belt. Let the words ring we bit the hand that feeds. Oh, the horror! We did this to ourselves!" The James Byrd reference comes in this song as well as the first of two Jonestown references. The track ends with Jim Jones himself speaking as part of the Jonestown "death tape" plays.

"Ad Mortem" and "We Are the Wolves" are the next two tracks. The first is another album highlight, while the latter makes the first overtly Christian reference on the album as Nowell growls out, "once washed in the blood of the lamb." "VII - The Fraudulent" is the next song of note; The song's beginning of "Liar, liar, liar" peaks your attention with the fast and blast beat driven track, but one of the most interesting lyrics in the album comes later. Nowell growls, "I'll see your Jonestown and raise you one Ruby Ridge." The line catches you and makes you think, but when you get into the rest of the lyrics it makes more sense. The entire song can be summed up when Nowell claims, "The sheep, when led to the slaughter, despite their urges to run must heed the calls of their shepherds until there are none. Liars!"

"A Pavement of Good Intentions" is the track that brings the most upfront Christian meaning and symbolism throughout and plays off of the old adage, "The road to hell is paved with good intentions." "To the Teeth" is the perfect finale for the album. The song stands out as a much slower track and sounds more like The Showdown than The Famine, musically. The final lyrics, "If this place doesn't make you sick it's because you've suppressed your reflex to tell right from purely evil deeds," seem to perfectly capture the essence of the album.

Now, some people are going to want to know if there is any foul language present since this isn't a Christian market release. There are three words to discuss here. In "The New Hell," the term "piss-poor" is used when describing the "yes men" that defend the corrupt. In "A Pavement of Good Intentions," both "damned" and "bastard" are both used in proper context and would not be counted as slang. Everything else is clean as can be for all to enjoy.

Musically, Architects, is solid. Though there is nothing new here, The Famine do it better than most. There is plenty of fast, furious, and heavy music to go around, but Godwin places solid guitar sections throughout the album. Garza is killer on the drums, and Jon Richardson seems to be the right choice for a replacement at bass. Most metal heads should get some pretty serious enjoyment out of this record.

The Architects of Guilt is a disturbing album. It's a tight, well-executed assault of death metal technicality, a more than worthy sophomore effort for The Famine, and most of all a very unsettling commentary on the world we live in. The guys in The Famine are clearly very angry about a lot of things, and this is uncomfortably obvious throughout the album. "The New Hell" makes reference to, among other things, "some pieces of James Byrd," and ends with audio from the death tape created by Jim Jones during the Jonestown mass suicide. "Ad Mortem" is an extremely harsh and unmerciful attack against addicts, saying "There is a special place in Hell for people like you." The entire album is one long, vicious assault against American greed, racism, and corruption, and while all of those practices deserve to be condemned, I couldn't help but feel unnerved by this album. Starting with the remarkably creepy album art to the ferocity of the lyrics, I was left wishing there was some sort of hope to be found somewhere. And there is, but you won't find it mentioned here, which is not surprising considering this album was not intended for the Christian market. However, the music alone is excellent, and sure to please any death metal fan. With all that said, I'm left wondering, is it healthy for us to dwell on such a hopeless portrayal of our sinfulness? Possibly, but each listener will have to answer that for themselves. - Timothy Estabrooks, 2/14/11