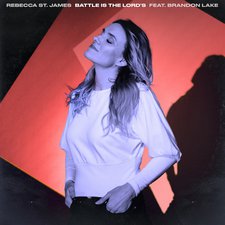 
In the mid-to-late 1990's, Rebecca St. James was not only a budding talent in the Christian pop and rock music scene, but she quickly became a mainstay in the industry for years. Not only was her love for the Lord infectious, but she preached a much-needed message of purity and waiting for our soulmate that sadly seems all but abandoned in today's odd cultural climate. But after taking some much-earned time off from music to focus on raising a family, Rebecca felt inspired to pick up the microphone once again. The result is a forthcoming worship EP, partnered with Bethel Music, that is preceded by a single--her first new music in almost a decade--"The Battle Is The Lord's."

The new single offers a little bit for both fans of today's worship music, as well as Rebecca's longtime fans. Sonically, the song feels like the offspring of her beautiful 2002 worship project, WorshipGOD, with her signature passionate vocals and heartwarming innocence in her voice. Bethel Music followers will likely love the inclusion of the collective's own Brandon Lake singing a duet with Rebecca here. The voices blend well, although Lake's clearly captures more of the modern worship style, while Rebecca's is unmistakably her own. The song works as-is, but each time I hear it, I can't help but wish she'd reintroduced herself to the CCM world by herself on her first single. I'd love to hear a mix of this song with RSJ singing it alone.

Lyrically, "The Battle Is The Lord's" is eerily timely. With a worldwide pandemic shaking our trust foundations, and literal anarchy and riots occuring in the streets across the U.S., the reminder that we need to be actively seeking our Heavenly Father's guidance is more relevant and important than ever. In the opening verses, Rebecca and Brandon sing, "Why so heavy, oh my soul? Did you forget Who's in control? If He calls the winds and waves to still, He holds you now and always will." It's the kind of simple reminder that songs throughout RSJ's career have encouraged listeners with. And at a time when so much around us is vying for our time and attention (and concern), it's a lovely reminder. The chorus brings home the theme, "The battle is the Lord's, take courage in the fight. The weapons of this war, our praises lifted high. My confidence is sure, My God has gone before." The song's style rests on a synth-heavy melody which works well for today's musical direction, while also calling back a bit to the early 2000's electronic sound Rebecca adopted for a time.

The Battle Is The Lord's (feat. Brandon Lake) - Single is a great way to get reacquainted with a voice fans will surely realize they've missed. Newcomers to Rebecca's music may also enjoy hearing something a little different coming out of the sea of sameness that often makes up the majority of today's worship music. Either way, with a brand new EP coming soon, this reviewer is especially looking forward to hearing more new music from Rebecca St. James.