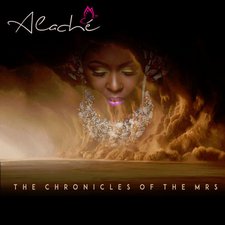 Alaché
The Chronicles of the Mrs.


Rejoice, all ye who hunger for contemporary pop; your bubble-gum based meal is served. Wearing a Destiny's Child influence on her sleeve and boasting as an "engaging, edgy, and upbeat" R&B worship/praise artist, the Washington D.C. based Alaché reemerges from a 5-year hiatus with a new mini-album, The Chronicles of the Mrs. Contextually, the title is quite fitting considering this marks Alaché's first release as a married woman. Not only has becoming a spouse served as a milestone in her life since her initial departure from the Christian music scene but becoming a proud mother to two baby girls as well. Yet, time, motherhood and marriage couldn't veil or deteriorate the spirit of the artist that hangs ever so evidently on the exterior. Instead, existence serves as Alaché's palette and perspective her paint to create a still-life reflecting both the familiar and the foreign.

Chronicles clearly surfs the waves of 2010's musical zeitgeist that has been propelled and kept afloat by artists like Drake and Dawn Richard but with the ambition to present a heart bound by worship. Punching at personal levels, the album goes into great detail to describe Alaché's demons and the way they manifest themselves. Confusion amidst depression and denial alongside mourning are among the topics within illustrating that not every broken heart can be remedied by wisdom. No amount of preparation can properly train the heart to become unaffected by the death of a loved one. No proverbial verse alone could wash away a sense of spiritual wandering without the instilled power of God. Her unashamed acceptance of pain is a vivid one, inviting those who can empathize to follow through to the album's closing message of finding a true home in the Lord's grace.

If only this marvelous approach to the songwriting was as evident within the entirety of Chronicles. The instrumentation is disappointingly generic for the most part. Acoustic guitars reach embarrassing MIDI levels that could have been handled better by Fisher-Price produced DAWs in tracks like "Another Day" and "Awaken Me." "Hiding Place," though decent in nature, would have actually come across as memorable had Alaché put prominence in the arrangements of keys/synth. Instead, she lets the chorus ride that prevalent C-note harder than Jacob's seven-year grip on Rachel. The acoustic version of "Heaven's Angel" is completely redundant, seeing as reverb effects heavily drown Roy Kenoly Jr.'s voice and ruin what was already one of the more enjoyable parts of the album with a filler track.

Occasionally, though, the album does get some things right. "Find Me" is just pouring with digital interference that doesn't attempt to shallowly replicate organic instruments. Slowed vocals grow to haunting proportions (not exactly "Fall Creek Boys Choir" material, but we're getting somewhere) with some excellent bars from special guest Niko accompanying the piece. "Same Tears Different Pain" carries along this fashion as well with equal success. The album could have suffered less had Alaché put the work in giving the mundane aspects of Chronicles a personality as beautiful as the one reflected lyrically, but at least it's half-baked. The spirit truly is willing but five years of sleep will do damage to any talent, unfortunately.