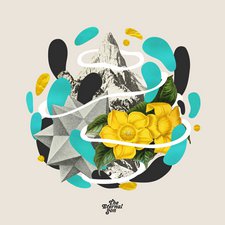 
In the music industry, there is certainly no shortage of talented British artists. I could name names, but it'd make for a much longer article than is necessary. Instead, the focus here is on one particular band from Manchester called Rivers & Robots. These fellows have released a couple albums with Come&Live!, and despite C&L!'s shift away from the music industry, Rivers & Robots have forged ahead, creating new music that's pleasing to the ears and glorifying to the Lord. The Eternal Son is their latest work, and it pleases and glorifies all the same.

From the get-go, Rivers & Robots display versatility, with a vintage, psychedelic-esque song in "Wait For You." The song, which yearns for the coming of the Lord, also takes cues from bands like Sherwood, Pacific Gold, and, to a lesser extent, Two Door Cinema Club. This blend of indie and pop rock (both modern and classic) is the backbone of The Eternal Son's sound. But despite some of the pop rock flavors, Rivers & Robots is pretty mellow for the most part. "To the Highest Place" is a simple, piano-led worship song that would fit really nicely in the middle of a live album (you know, when everything gets really serious and solemn), and the following track, "Who Is Like Our God," sounds quite a bit like Bon Iver's "Holocene." I was even a bit surprised later in the album, in the title track, when I was greeted with a relaxing melody played on a saxophone. It was unexpected, but enjoyable.

One of the top tracks is "A Love That Carries Me," which, musically, is one of the busiest tracks, but not in an overwhelming way, as busy songs can be sometimes. The band explores with some alternative musings and synthesizers to create a spacey background sound. I especially like the vocal melody. My favorite track overall comes near the end in "You Know My Name." A deeply personal track about not only the relentless love of God, but also the intimacy of having a personal relationship with Him. Lyrics like "Though You're infinite in wisdom, powerful and mighty, still You call me Your friend, though You're seated in the heavens, King over creation, still You call me Your friend" showcase the idea of God's greatness yet willingness to have anything to do with us. Such a thought should humble man, yet it's still so hard to comprehend. Add to it a mild electronic soundscape, a la Canopy Climbers, and it's a great song all around.

Before this album, I had heard only a song or two from Rivers & Robots. But The Eternal Son has been in almost constant rotation since I got it. It's catchy, versatile, and worshipful. In fact, it's the worship album I'd recommend most of 2016's offerings thus far. It's hard to really define their sound with one or two genre classifications, but if any of the other bands I mentioned above caught your eye, you may be a good candidate to enjoy this album.