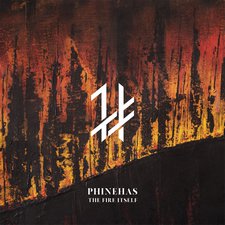 Phinehas
The Fire Itself


Metalcore has had its share of fads over the years. From the emo singing choruses of the 2000s to the synth-infused electronicore of the 2010s, bands seem to be constantly searching for something new to fuse with the over-saturated genre. Los Angeles natives Phinehas have a different calling card: nonstop ferocious musicianship. While it's not the most unique approach to metalcore, this tactic has given the band a very consistent discography with plenty of variation kept between albums. The Fire Itself, while lacking the cohesion enjoyed by 2017's Dark Flag, leverages its sheer brutality to become one of the band's best albums to date.

Phinehas has never been heavier. Album opener "Eternally Apart" features a slow, acoustic guitar-driven build, but once the full band kicks in, the album blasts ahead with nary a lighter moment until its lone ballad, "The Storm in Me..." and that's not even until track 8. Vocalist Sean McCulloch gives his most ferocious screaming performance to date, but the major difference is in his clean vocals, which he stretches and strains to a far greater extent, giving even the choruses a heavier feel. He also takes some time to experiment with them, as evinced in the tasteful use of auto-tune on "The Storm in Me." Bassist Bryce Kelley is rather muted by the production (an unfortunate habit in the genre), but the work there is solid as well. Freshman drummer Isaiah Perez, meanwhile, can't help but be heard, beating the tar out of his snare and bass drums, but still knowing how (and when) to tone things down, such as in a very interesting breakdown in "Holy Coward." Guitarist Dan Gailey delivers his expected nonstop technical riffs and fretboard-shredding solos, from the sweep-picked leads over the chorus of "Thorns" to the dual solos on "Holy Coward."

According to the album's press release, the band took a different strategy towards writing the lyrics of The Fire Itself, focusing more on their own lives than the lives of others. The lyrics throughout are quite thoughtful, including several very quotable lines. Take "Love is what is left over when being in love fades away / Faith is more than just leaving when every second is spent in pain" from "Defining Moments," or "The choice must be made / to die alone or endure what love has taken away ... who are you when your dream is dead?" from "Dream Thief." "Thorns," in particular, draws connections to the suffering of Christ: "Beautiful vines on a crown that You wore / to find trust requires thorns." While heavy albums focused on self-reflection have a tendency towards (sometimes extreme) lyrical darkness, there's a hope in the grace of God that pervades this album and keeps it positive and uplifting, even while it describes human brokenness.

Ferociously heavy, lyrically hopeful, and musically as technical as ever, The Fire Itself sees Phinehas doing what they do best. By, for the first time, playing through a full album without any instrumentals or interludes, Phinehas has gained a whole new level of musical savagery, which they leverage to its full extent. While it may lack the concept album feel of albums prior, this album more than makes up for its sacrifices with its sheer intensity and unmatched musicianship. As thoughtful in its lyricism as in its musicianship, The Fire Itself is a heavy album well worth the time.

Solid State signing Phinehas in 2017 was arguably one of the biggest gets in the label's history, considering the band's rabid and dedicated following from the independents. Dark Flag showed the world what the metalcore giants were capable of, and four long years later, they only seem to have gotten better. The Fire Itself is the band at its best. It's an album that almost demands to be put on repeat, with its near-endless intensity and powerhouse vocals. The technical musicianship rivals that of August Burns Red, and the Showdown-esque hints of '80s guitar tones and riffs ("The Fire Itself," "Holy Coward") give the album a more unique feel amongst the band's current label mates. It's hard to pick my favorite moments, but the aforementioned "Holy Coward," along with the following track, "Dream Thief," make for an incredible one-two punch that really satisfies. To top it off, the album features introspective lyrics that focus heavily on the separation between God and man, but also touch on the work He's done to bridge that divide ("You are not a number forever to slumber in your cell / Death falls when you face the wordless darkness alone / Death falls, look into the unknown / To escape in the night, and never sleep again / In the night, come with me instead / With stars to guide, the pain will subside / In the night / Unafraid of what darkness brings / Not fated to be meaningless / Composed for more than silence / Not found to hide, or quiet secrecy inside"). Four years is a long time between albums these days, but Phinehas' next chapter more than makes up for the wait. The Fire Itself is perhaps the best metal album that I've heard in 2021 thus far, and it'll take a lot to topple it. - Review date: 8/25/21, Scott Fryberger of Jesusfreakhideout.com