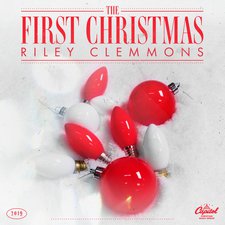 
Depending on how familiar the given listener is with Nashville native, Riley Clemmons, her latest outing will either function as a two-sided single or a full-up extended player. Those who have followed her career for a year or more will be quick to note that the closing pair of cuts on The First Christmas previously saw the light of day as singles, themselves, this past November, while the two new songs - the title track and a cover of Wham!'s 1984 holiday chestnut, "Last Christmas" - are making their opening bow this time around.

Regardless of the level of familiarity, there's no denying the fact that Clemmons' newest showing offers plenty for fans, both old and new, to sink their teeth into. The classy, understated tones of the already-released "Have Yourself a Merry Little Christmas" are the perfect vehicle to showcase her spot-on, crystal-clear vocals. In the same way, the ballad-like nature of "Silent Night," which also dropped last fall, provides a likewise close look at the Nashville native's impressive singing voice, albeit against a more fleshed-out instrumental backing.

Of the two new numbers, "Last Christmas" comes closest to mirroring the upbeat, dance-friendly grooves found on Clemmons' ingratiatingly catchy self-titled full-length debut, which is a very good thing, to be sure. The best-of-EP award, however, goes to the title cut, which, more than any other song, captures the tangible melancholy and longing that are so intrinsic to the month of December for so many. And the poignancy of its lyrics ("A story of love/ The simplest of joys/ Make this the first Christmas/ That I won't forget/ To open my eyes and see it again") is only heightened by the realization that Clemmons penned them, herself.

Objectively speaking, the pacing of both "Have Yourself a Merry Little Christmas" and "Silent Night" is arguably a bit too rushed. Similarly, "Last Christmas," as undeniably winsome as it is, doesn't really bring anything new to the table when placed alongside the surplus of cover versions that have surfaced since George Michaels and Andrew Ridgeley first unleashed it three and a half decades ago. Of course, the latter track's sort of welcome familiarity could arguably be considered its strongest selling point. And, even when she's breezing through her songs with nary an ostensible moment to spare, Clemmons' voice and enthusiasm carry them in a way that few of her contemporaries are able to do.

For those who enjoyed her previous single, this new EP will probably leave them likewise satisfied. And, even for those who aren't necessarily enthralled by Christmas-themed music, Clemmons' newest offering leaves little doubt that her impressive singing voice is still very much a force to be reckoned with. Most importantly, though, members of both camps should take solace in the fact that The First Christmas, regardless of its individual weaknesses and strengths, brings them that much closer to the release of one of the more eagerly-awaited sophomore albums in Christian pop.