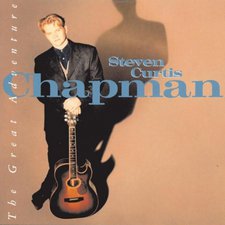 Before Steven Curtis Chapman released The Great Adventure in 1992, he had already released four albums, achieved eight #1 hits on the radio, won a GRAMMY and 9 Dove Awards, and had become one of the biggest names in the Christian Music industry. By the time he released his fifth album in 1994, he had achieved six more #1 hits, won two more GRAMMYs and nine more Dove Awards, and had become arguably the biggest name in Christian Music. Without a doubt, no album in SCC's career has been more successful than The Great Adventure, and there is a reason for that.

This album begins with a theatrical buildup; a two-minute instrumental leads into the iconic title track and sets up the rest of the album as an exhilarating experience. It is a fantastic opening, but unfortunately, this buildup is left slightly unresolved. "Where We Belong" doesn't seem to fit after that big opening; its production is smaller, and the "experience" that we were anticipating was lost (for the most part). From then on, the album subsides into the usual Steven fare, which is actually a whole lot better than most other artists could hope for--inspired songwriting, moving music, and the love of God pouring through every moment that passes.

But with all that said, and despite how great this album is, there really isn't anything "special," per-se, about the album. The music shifts ever so slightly to a more orchestral sound, features three songs with guest vocalists, and bigger production. But beyond that, there is really nothing that sets this album apart from his previous works like For The Sake Of The Call and More To This Life (although the obvious exception is his playful, tongue-in-cheek venture into rap music in "Got To B Tru" with TobyMac, a song that SCC has since admitted was done on a dare by Carman. There are your typical SCC gems that any decent SCC fan knows (the title track, "Go there With You," "That's Paradise"), and the songs that may have lost popularity since then, but still remain classics to the devoted (his duet with Bebe Winans in "Still Called Today," his other #1 hits "Where We Belong" and "Hearts Cry"). "Got To B Tru," as mentioned before, is fun and amusing. And then there is "Maria," a beautiful and touching song buried deep in the record that, years later on a visit to China after already adopting two, helped inspire Steven to adopt a third (who was already called Maria by the orphanage staff). And in all reality, while you can easily tell while listening that this is an old album, it does not sound all that dated, especially in comparison to his albums that precede it. Whether the music is soaring, fun, bouncy, tender, quiet, or somber, it is just as enjoyable now as it was in 1992.

The impact on Chapman's career as a result of this record was phenomenal, winning the "Best Gospel Album" GRAMMY both in 1993 and 1994 (for The Live Adventure, the live companion album), receiving Gold certification in a mere seven months, and even seeing success in the mainstream. And since the album still holds up pretty well, it is easy for our 21st-century ears to appreciate it. Without a doubt, it is his best record in the pre-Speechless era.