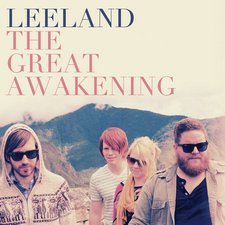 Maturity is something that should develop naturally. Some try to force themselves to adjust while others opt to never grow up, for example: Peter Pan, Benjamin Button, and Hawk Nelson. Leeland arrived on the music scene five years ago and they exploded with a sound of melodies that blew away listeners. Following their debut success they continued to garner attention with their second and third releases all the while maturing lyrically and musically. With their latest release, The Great Awakening, they are taking their gutsiest stride and have produced not just a good thing... but a great thing.

The album opens with the catchy title track, "The Great Awakening." Piano pop and joyful lyrics flow through the song as Leeland inspires the Church to spread the good news throughout their towns. With clever word play Leeland sings, "One man wakes, awakens another. Second one wakes his next door brother. Three awake and rouse a town and turn the whole place upside down." Following this borderline bubbly opening song is the serious and convicting "All Over the Earth." The track lasts an intimidating 8 minutes and 38 seconds. Honestly, it feels like the song began as a prayer and turned into a worship anthem. It is not the most creative lyrically or melodically, but the honesty and passion behind it create such an impact that by the end of the song you wish that it could last forever.

"Chains Hit the Ground" introduces the theme of liberty that is found in a life lived for Jesus. Singing about freedom in the Lord can sometimes be overdone, or rather under-done, as some artists focus on the fact that we don't have to be who we once were. Leeland's words aren't just about being free from who we were but that we are now meant to cling to Jesus and become more like Him. "Pages" and "Not Afraid Anymore" echo this theme with more of a reflective tone, building off of the freedom they receive while producing fruit in their personal lives and sharing that love with others. These songs sing of evangelism but it sounds as if revolution is the goal.

Tackling a new style is the beautiful "I Wonder." If you've ever wanted to hear Leeland try southern gospel you will find it here. Harmonically and musically it is a masterpiece as the song simply ponders the majesty of our Creator. But along with that admiration, Leeland offers the truth that seeing the Lord should transform us in the challenging "While We Sing." This doesn't just address the personal Christian but the local Church, especially as Leeland sings, "Church arise, arise and shine, shake yourself from the dust. God is calling us to go." It's a great reminder that Jesus wasn't inviting His church to go... He was commanding it to.

Bringing the album to a climactic and gorgeous ending is another anthemic worship experience in "Unending Songs." This could honestly be a song that worship leaders have been searching for that is easy enough for a congregation to sing but carries the depth that tends to be lacking in many modern corporate worship songs.

Maturity should come naturally; unfortunately for many it takes years and years, however with direction and wise guidance it can arrive rather quickly. Leeland has proven to be a band that embraced the maturity of not just worshiping in spirit and truth but also in the way they present the gospel through music. If they were looking to spark a great awakening in the church... this album could very well be the beautiful sound of the alarm clock.

In 2006, Leeland debuted with the groundbreaking Sound of Melodies, and with each subsequent album they seem to leave an ever better impression in the "church music" scene. With their upcoming release,The Great Awakening, they are making some very different leaps in an onward and upward fashion. Do not expect it to sound very much like their previous projects, however. Frontman Leeland Mooring's vocals are at the top of his game and, at points in the album, it feels like he didn't write any of the words he sings but just recorded himself praying to a melody. The purpose of the album is obviously to spark a spiritual awakening in the Church and they do not miss the mark in portraying it. Musically, the songs might not fit every church's idea of corporate worship, but a majority can. There is definitely no mistaking that it's Leeland, but this time there seems to be a deep sense of divine inspiration. If you have been a fan since 2006, or just want something fresh, this is the album you not only need to buy but preorder. Expect good things with The Great Awakening... - Review date: 8/8/11, written by Ryan Barbee of Jesusfreakhideout.com --->

Leeland has found success in the Christian music market with their worshipful lyrics and catchy sound. With their fourth studio album, The Great Awakening, they continue implementing this formula with a moderate amount of success. The album opens with its namesake; this pop tune is catchy and light, making for a good opener. It does become slightly repetitive, however, repeating the same stanza four times. A similar diagnosis can be given for "All Over the Earth." It's an excellent praise piece, but creativity lacks as the song drags on for 8 minutes, 38 seconds. "I Can See Your Love" is a standout track, with a distinctive sound, precise vocal delivery, and a hymn closing out the final minute. "I Cry" is another noteworthy track among the eleven found here, an honest expression of struggle and doubt. Rather beautifully, each expressed fear wraps back around and refocuses on finding strength in Christ. "While We Sing" calls believers to live for Christ and not become complacent. Other than these exceptions, the majority of the album is a collection of praises to God. The Great Awakening is probably one of the best worship albums to come out in quite a while. Like most worship albums, though, unique music and lyrics are hard to find. - Jerold Wallace, 9/21/11