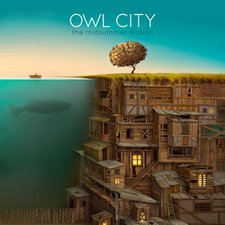 Last summer, the super anticipated sophomore album from Owl City, All Things Bright and Beautiful, arrived in our hands. To some fans, myself included, it was several steps above his Universal Records debut, Ocean Eyes, but in the end, for whatever reason, it wasn't as well-received. Maybe it was because there wasn't that one big single that Ocean Eyes had ("Fireflies"), but whatever the case, it didn't gain the popularity expected. So while it seems fast, it's not a huge surprise that Adam Young is already back with album number three (with Universal/Republic), The Midsummer Station.

Fans got an early taste of The Midsummer Station a couple of months ago when the teaser EP, Shooting Star, was released. Featuring outside production for the first time ever, the 2012 model of Owl City was clearly different than before. Where smart and cryptic lyrics with memorable melodies and synthy goodness were the staple of Ocean Eyes and All Things..., songs like "Gold" and "Take It All Away" only had a few aspects that distinguished them from the majority of modern pop radio. Things seemed to go downhill when Owl City released a duet with the infamous "Call Me Maybe" singer, Carly Rae Jepsen. "Good Time" is a feel-good track, but features a beat that you might normally hear from someone like Katy Perry, and the lyrics don't really help the situation at all either (nor does this song redeem Jepsen's atrocious hit single). Her voice is very obnoxious and exaggeratedly-overly breathy (anyone else think she sounds like Tommy Pickles?) and her verse is completely void of any substance ("Freaked out, dropped my phone in the pool again, checked out of my room, hit the ATM, let's hang out, let's go down to get down tonight, it's always a good time").

Of course, this isn't the first time we've heard guest vocalists in an Owl City song. Pop singer Lights made an appearance on All Things Bright and Beautiful, and Breanne Düren makes frequent appearances as well (in addition to being part of the live band). While some have trouble adjusting to Düren's vocals, I've always particularly enjoyed them. So it is a little disheartening to not hear a single note from her anywhere this time around. Not that Owl City can't make a good album without her, but it's become a small staple that I've gotten used to (this isn't a criticism, just a note I thought worth sharing).

The two previous albums both featured opening tracks that instantly made you want to both continue listening as well as anticipate what the rest of the album was going to bring. The Midsummer Station's opening song is called "Dreams and Disasters," and while it's not necessarily a bad track, it feels a little empty and bland. I feel hesitant to mention Katy Perry more than once (or at all, really), but the vocal pattern in the hook is really reminiscent of her song "California Gurls" (don't ask how I know that song) as well as bearing a slight resemblance to Owl City's "Umbrella Beach" from Ocean Eyes. In essence, it's another pop track that doesn't have anything that stands out. Several songs later, a pair of fun dance tunes called "I'm Coming After You" and "Speed of Love" turn out to be a couple of the better tracks, musically. To be honest, as far as the music goes, these are a couple of the best dance tracks I've heard in a long time. I love the oddly-played piano in "I'm Coming After You" and the 16-bit, Sega Genesis synth in "Speed of Love." Lyrically, they're decent, but pretty corny, even for Owl City standards. The former is about Young chasing after a lover, as he sings "You've got the right to remain right here with me, I'm on your tail in a hot pursuit, love is a high speed chase racing down the street, woo woo woo, I'm coming after you." The "woo woo woo" part is supposed to be the sirens of the alleged police car, and it's really more annoying than anything. The song would have been a bit better had that not been included. "Speed of Love" has lyrics that are somewhat related to the previous song, singing "You were so hard to find, with oh so many clouds across my summer sky, you my constellation prize, yeah every single star is sparkling in your eyes," which is some pretty good lyricism and word play. It's directly followed by "So don't you go, no don't you go, 'cause don't you know, I'm up here alone, so high like a satellite, I'm sending you a signal tonight," which is also decent. But it gets corny in the hook: "Oh oh oh like a streak of light, oh oh oh watch the world fly by, oh oh oh rev your engine up, everybody's racing at the speed of love."

Later on in the album, we're given a couple more songs that fair better and keep the album from going out on a bad note. "Embers" and "Silhouette" are fairly solid, and give a nod or two to previous material ("Silhouette" vaguely reminds me of "Lonely Lullaby"). The biggest issue I have with these songs is that they just aren't memorable. As many listens as I've given them, I don't remember anything about them, when the last two albums took me two listens at the most to be able to belt out the lyrics along with Young. The Midsummer Station then closes with the same song that closed the Shooting Star EP, "Take It All Away." As I mentioned in the Shooting Star review, "Take It All Away" is like a modern boy band type of song; it's also the best song on the album. Take from that what you will, but I unashamedly stand by it.

Ultimately, there's so much to say about this album. Sadly (and I do mean, sadly), most of it is negative. The Midsummer Station is an album that leaves me with less and less desire to spin it again after each listen. If you've been expecting more brilliance from this master of the craft, you'll be sorely disappointed. This obviously stems from the fact that this isn't a 100% Adam Young composition, and while I have zero proof, I feel like this was the label's way of trying to rebound from the low sales of All Things by having him produce something that sells at the cost of real musicianship and creative songwriting, at which Young is clearly gifted. Positively, any of these songs could make it to a pop radio station and instantly be better than most anything else on said station (except "Good Time"). But for an Owl City album, The Midsummer Station is a severe misstep. I'm still an Owl City fan, but I eagerly anticipate his next album, because this won't hold a spot in my record collection.

In an age dominated by disposable and often objectionable Top 40 singles, Owl City has stood out as the notable exception to the pop star stereotype. Ever since his runaway hit "Fireflies," Adam Young has remained uncompromised in his quality musicianship and outspoken faith; while Ocean Eyes was a unique and stimulating debut, All Things Bright and Beautiful solidified Owl City's place in the field as more than a passing synthpop fad. But it's this entirely agreeable precedent that makes an album like The Midsummer Station all the more disappointing. On its face, the record isn't horrifically inept; Young's positive themes and inspirational melodies are all still here with a variety of musical approaches to boot, and sometimes a mere adjustment of expectations is all that's necessary to enjoy the "fun factor" within ("Dreams and Disasters," "Dementia," "Embers," "Silhouette" and "Take It All Away" are good examples). Nevertheless, with the trademark clever wordplay and intricate melodies dripping with attention to detail in severely shorter supply than usual, the resulting album feels airy and hurriedly half-baked. Tracks like "Shooting Star" and the Carly Rae Jepsen duet "Good Time" quickly come to mind as exclusively radio-friendly, but even with some flat-out uncomfortable moments found in "I'm Coming After You" (which frankly feels more like the musings of a stalker than an innocuous lover) and "Metropolis" (the chorus line "like a hijacked plane/there's no stopping this" is more needlessly unsettling than quirky), the record is measurably deficient in excellence both in parts and as a whole. For each individual listener, The Midsummer Station will feel somewhere between uncharacteristically unpolished and devastatingly inferior, but either way, they know Young is capable of far better than "guilty pleasure" status, and Owl City's third full-length project is an unanticipated misfire. - Roger Gelwicks, 8/7/12