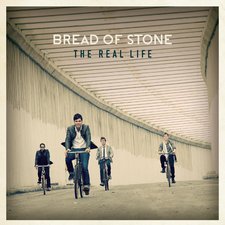 Bread Of Stone
The Real Life

While there isn't any one surefire formula guaranteed to catapult a given set of performers to the absolute pinnacle of the independent music heap, certain broad guidelines are available to assist aspiring young bands seeking to ply their trade in the indie arena. First of all, its members would be well advised to subscribe early on to a distinctly lo-fi approach to their production - the lower the bottom line on the budget, the better. Next, they should write a set of songs that are, at once, literate, dreamlike and fiercely introspective. And lastly, although not quite a necessity, it never hurts to work the image side of the equation by purchasing their stage garb from the nearest one-of-a-kind or vintage clothing store.

Needless to say, under no circumstances imaginable would the group in question ever entertain the notion of sharing stage time with a 30-plus year-old classic rock outfit from the '80s. And, yet, that is exactly what the members of the Sioux City-based indie ensemble Bread of Stone did in the fall of 2005 when they opened for none other than CCM hard rock icons Petra on that band's 58-city farewell tour. Of course, whether they care to admit it or not, many a member of the Christian alt and indie scenes practiced their licks in front of the bedroom mirror listening to classic Reagan-era Petra projects. And, truth be told, as their first three glossy, custom-fit-for-radio soft pop/rock efforts prove, the Stone collective has always been far more indie in terms of label affiliation (or lack thereof) than actual style of music played.

Ten years into their career, the Stonesmen have, at long last, inked a deal with the folks at the Dream Records, who have opted to reissue the foursome's 2012 Real Life release. Listening to the first few minutes of the album, it isn't hard to see why it found such favor among those in the major-label world. Listeners who appreciated Abandon's migration from straight-ahead pop/rock into more dance-oriented fare will almost certainly find much to love on the shimmering, syncopated leadoff tune, "Hold On," which sounds a bit like a slightly more rocking version of Maroon 5's "This Love" and is about as perfect a melding of rock, pop and dance music as most listeners are likely to hear. The M5 similarities are brought into even sharper focus on the satirical title track, which pokes lighthearted fun at mankind's attempts to find satisfaction apart from God.

Although a non-stop procession of toe-tapping entries such as these would likely have made for a fairly solid showing, front man Ben Kristijanto and his associates have opted for a decidedly more multi-faceted approach this time out. "The Line" is a superbly-crafted combination of atmospheric dream pop and classic '70s power pop - think the Flaming Lips covering Badfinger. The gracefully soaring "Changed," by comparison, locates the engaging middle ground between early-period The Afters and the bracing modern rock textures of, say, Switchfoot's "We Are One Tonight." "Parachute" echoes the ingratiatingly catchy emo-tinged pop/rock of artists like Silverline and Hearts of Saints. And the bracing, hard-edged "One Way Runner" calls to mind the infectious garage rock left turn taken by The Elms' just before they decided to call it a day.

As musically impressive as those cuts are, Life isn't nearly devoid of flaws. Indeed, tracks like "Heartbeat" and "Beautiful" revert back to the same largely ordinary radio-ready fare that dotted previous BoS projects and has now lamentably become nearly synonymous with Christian pop music as most current-day followers know and understand it. Likewise, even though the quartet clearly knows its way around a great pop melody, the lyrical side of the equation remains something of an Achilles heel. "Supernatural" ("When you touched me I got a feeling/ Like a love bomb falling in the dead of night/ A supernova of healing light"), for example, sounds more like the sort of thing one might find in a note passed between junior high classmates than the words to an actual song. And lines from "The Real Life" like "Science keeps pushing a fake placebo/ It's easier to swallow this green gazebo" ostensibly aim for wittiness and insight, a la Steve Taylor's work with Guardian and the Newsboys, but wind up falling well shy of that admittedly noble aspiration.

In fairness, even the record's least exceptional cut is arguably on par with most of the material currently enjoying heavy rotation in the Christian pop Top 40. Similarly, although its lyrics certainly aren't destined to pull down any awards for originality, they are refreshingly straightforward, overarchingly positive, and delivered in a carefully-measured manner that enhances the album's already winning rhythmic content - the sum total of which will arguably distract all but the fussiest of listeners from its inherent literary shortfalls. Neither ground-breaking nor filler-free, The Real Life nevertheless features an invigoratingly sunny disposition, sparkling production aesthetic and firm understanding of the intrinsic relationship between the indie and pop genres that render it the strongest installment in the Bread of Stone catalog thus far - one that true music aficionados would be well advised to investigate.