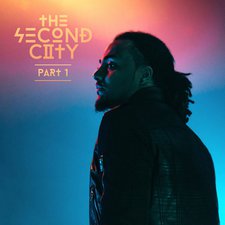 
Word Entertainment (known for artists like For King & Country, Needtobreathe) took a chance signing Steven Malcolm as their first rap artist in 2016. With one listen to his flow, his genre crossover appeal, and heart for sharing the Gospel, it's easy to see why they were willing to branch out with Malcolm. There were some exceptional tracks on his 2017 debut album ("Can't Take My Dream," "Never Let You Go"), but unfortunately, they were overshadowed by unsubstantial lyrics on "Hot Boy," "Party In The Hills" and "Cereal," as well as occasional overly braggadocios lyrics. A year later, Malcolm is back with an ambitious 4-part project entitled The Second City, which will be released as a series of EPs over the course of 2018.

The best qualities of Malcolm's style of rapping--his casual flow, a unique tone with a Jamaican accent, and clear diction--are all showcased on The Second City: Part 1. The single "Watch" is a prime example of the characteristics fans are connecting with, and it definitely shows improvement from his previous singles. "Not To Us" and "Rodeo" both feature catchy hooks from Taylor Hill and respectable verses from Malcolm. "Rodeo" has the most distinct sound on the EP with a reggae / Hispanic guitar riff and dynamic drum beat. On "Fadeaway," 18-year-old artist and producer Zauntee delivers solid bars in the latter half of the song, though it's hard to overlook the fact that the phrase "fade away" is repeated 76 times within three and a half minutes. The amount of repetition in combination with an infectious melody makes "Fadeaway" a song that will get stuck in your head whether you like it or not.

The title The Second City has a dual meaning of being the nickname of Montego Bay, Jamaica (Malcolm's heritage) and also a representation of new life found in Jesus. "Not To Us" immediately makes this clear, directing the album's attention towards God, "not to us, but to your name be the glory." As in his debut, he does talk about his own skills at rapping, but it's easier to get on board with that when it's not the first thing we hear. Another theme that has come up in his music is "real recognizes real," more or less meaning people who have been through tough times and deal with serious struggles can identify and relate with someone else who also has a lot of baggage. Malcolm does open up a bit on this short EP, making him feel approachable and genuine, but at only 15 minutes in length, it will most likely be easier to fully engage once we hear the subsequent parts of this series. Overall, Malcolm displays growth as an artist with The Second City: Part 1, and if this is any indication of the direction he is headed, things will only get better with parts 2, 3, and 4.