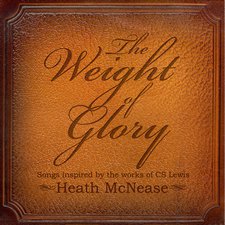 Heath McNease
The Weight of Glory - Songs Inspired by the Works of C.S. Lewis

On the heels of perhaps his best work to date in the hip hop album Thrift Store Jesus, Heath McNease is taking the second half of 2012 to put out some more singer/songwriter material. The Weight of Glory is a folky acoustic album where each of the twelve songs are based on different works of the famed Christian author C.S. Lewis, from The Chronicles of Narnia to Mere Christianity and Surprised By Joy. Not surprisingly, it's an uplifting and very enjoyable listen.

To be more accurate, the album is fully titled The Weight of Glory: Songs Inspired by the Works of C.S. Lewis; thus, they are less based on the books themselves and more songs that came about after years of McNease reading his works and being so deeply influenced by them. And while you may have a better understanding of each song after having read its respective book, the songs are still enjoyable and relatable even without any prior knowledge of the books. (Note: To make it easy to figure out which book each song is about, each song is titled the same as its respective book, with the exception of "Edmund," which is from The Chronicles of Narnia).

McNease explores several different styles of acoustic instrumentation for The Weight of Glory. The album starts with "The Great Divorce," which bears some Mumford & Sons, folk influence in some of its verses, although there are a lot of pop elements used as well that make it a little more difficult to label it folk. It's signature McNease, as he's never one to limit himself to one specific genre for an entire album. Though the most common form of this is some combination of hip hop and acoustic, it's not uncommon to hear some blues, alternative, and folk music incorporated. "Mere Christianity" is a terrific example of this; a lot of the instrumentation brings to mind images of the Old West, but there's also hints of The White Stripes, the Gorillaz and some of McNease's signature hip hop flows in the song's bridge (this is the only time he raps on this album, and the song was perfectly selected). The rest of The Weight of Glory is multi-genre to some extent, but "Mere Christianity" is probably the most experimental in this aspect.

One of the more upbeat songs is "The Problem of Pain," based on a book Lewis wrote about reconciling pain and suffering with a loving God. The song is pretty simple, musically, with just a piano and some acapella in the background acting as a couple more layers of music. Lyrically, it can almost get a little depressing, as McNease sings "The problem of pain, it insists that you quietly watch it spread and attack your insides." But as the song fades out, McNease sings his own rendition of one of his favorite Lewis quotes: "Is it safe to say that if I wrote 'darkness' on the walls of myself the sun would still shine? Your glory will blind as much as it ever did and all would be well." "Edmund" uses the story of The Lion, the Witch, and the Wardrobe as its base, and sings about betraying Jesus. Edmund is the middle child in the family, and in the book, he finds himself easily susceptible to the White Witch (who represents Satan) and sells out his family. The song is a little dark, and has a little bit of hip hop flavor in the beat, but it's a mild flavor that doesn't really stand out all too much. The flavor changes as "Perelandra" comes in, sounding like something you could hear from Simon & Garfunkel, which is a sound that continues into "Till We Have Faces."

One of my favorite tracks is the worshipful pop rock song "Surprised By Joy." The book Surprised By Joy recounts Lewis' search for joy and also describes his transition from Atheism to Christianity. The chorus sings "Joy unspeakable and full of glory, but the half has not been told, You're not a reason, You're reason itself." Later, McNease sings "Your grace is complete, supplyeth my needs, unspeakable joy surprised me." It's another lyrically simple song, but in the context of non-simple songs, it comes at the perfect time and is a really good song to listen to and worship along with. The Weight of Glory closes with the title track, "Weight of Glory," based on a series of essays that Lewis wrote and delivered at various places at various times. Up to the song's halfway point, the song is much like something you could hear on Air1 or K-Love (which should probably happen, honestly). At the halfway point, the style changes pretty significantly, and takes on a sound like a more acoustic-focused Black Keys song. It finishes with a humble piano and McNease singing "The weight of this glory is bringing me down to my knees."

To put it quite simply, Heath McNease has outdone himself once again. The rate at which he writes, records, and releases high quality music is astounding, and The Weight of Glory is no exception. McNease is a very gifted artist, and his willingness to share his music with any and everyone for free is truly inspiring. If you've enjoyed McNease's acoustic offerings in the past (Shine On, The House Always Wins), or you happen to be a big fan of C.S. Lewis' books, you'll love The Weight of Glory.