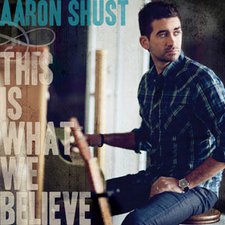 Aaron Shust
This Is What We Believe

By this point in his career, Aaron Shust has become a mainstay in the Christian music scene. While he has yet to match his original success on his debut, Anything Worth Saying, Shust has established himself as a consistent creator of solid, serviceable worship music. His fourth album, This Is What We Believe, is a somewhat less inspired continuation of this tradition. It also marks Shust's departure from his original label, Brash, and relocation to Centricity Music.

At the beginning of his career, Shust made a name for himself with slightly folk worship tunes like "My Savior, My God," which avoided the driving, arena-rock worship styles of many other artists. This approach gave him the opportunity to be more melodic and intimate than many others. Unfortunately, This Is What We Believe marks a departure of sorts from this trademark. Mellow acoustic tracks like "Carry Me Home" (from Shust's third album, Take Over) are nowhere to be found on this release. Instead, there is an abundance of the straight-ahead electric driven worship anthems that one would expect to find in any number of worship albums being released lately. The folk influence is still there if you look hard enough, but it's less apparent. Similarly, Shust's lyrics don't fair quite as well either, becoming more cliche and less original. This is evident on tracks like "Your Majesty" and "We Are Free."

Perhaps in an attempt to recreate his success with "My Savior, My God," Shust has taken two old hymns and re-imagined them with new tunes. "Risen Today" takes the words of Easter favorite "Christ the Lord is Risen Today," while "Sing of My Redeemer" borrows lyrics from the hymn "I Will Sing of My Redeemer." Unfortunately, neither song is very memorable; recycling lyrics from old hymns has never been the most creative idea, and in this case it probably would have been more effective if Shust had simply covered the originals.

With all that said, the album is not without its highlights. "My Hope Is In You" is a cheerful piano-driven track with a slightly jumpy beat and a catchy melody in the chorus. "Wondrous Love" is a beautiful tune that features some poignant female guest vocals, while avoiding the temptation to be more electric and brash than it needs to be. Even the less original tracks are melodic enough to be enjoyable, and there is certainly a place for simple worship lyrics now and again.

At its worst, This Is What We Believe would serve as appropriate background music for a worshipful moment, which is more than can be said for some other worship albums that have been released recently. At its best, it reminds us of what Aaron Shust can do when he writes to his fullest potential. As a whole, this album is somewhat of a disappointment, yet it is also an above average release when compared to the worship genre in general.

He's become a household name for Christian music fans over recent years, and a staple for worship leaders everywhere. Aaron Shust, at the very least, always has the tendency to generate quite a buzz. With that in mind, the expectations for each album of his are raised higher each time, and rightfully so. In the music industry, the standard is to find growth in each album, and while Mr. Shust has certainly demonstrated that previously, the disappointment with his latest installment is a bit too widespread. Monotonous songs are prevalent here, so much in fact, that it isn't exactly possible to even pick a standout track. It's not easy to criticize such an endearing artist, especially one with such talent. While the potential is certainly there, the overall lack of anything very compelling on this record drags it down. Aaron, you're phenomenal, but much more was expected from This Is What We Believe. - Logan Leasure, 8/21/11