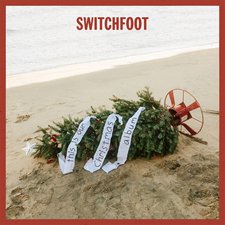 Switchfoot
This is Our Christmas Album


Switchfoot spoils their fans. No clearer could this be seen than the lengths they went to during Covid/concert lockdowns to deliver must-see Livestream concert experiences. Each one was brimming with regularity, creativity, and behind-the-scenes access to the band. If those werent proof enough, they now grace the end of 2022 with the long-clamored full-length Christmas album. Merry Christmas, indeed! Five originals and five covers make up the ten songs of the album with only one (New Years Day) floating around on the internet prior, though not officially released for sale.

First things first, a quick perusal of the tracklist reveals no Evergreen. This is both a bold step and the right call as its been around for over twenty years (On Happy Christmas compilation in 1998). It can be heard elsewhere. Also, Another Christmas (Old Borego) is nowhere to be found. Thats a little more puzzling to this longtime listener as it would have been a great companion for these new originals. Those potential disappointments aside, there are many things to celebrate on the straightforwardly (The Office-inspired?) titled This is Our Christmas Album.

The opener, California Christmas, got the single treatment in advance of the album release and its a playful and perfect way to kick things off. Its also the best overall song. This set hopes high for this typically hard-to-please Christmas music listener, and Im relieved to report that the San Diego boys dont disappoint. That said, the album is far from perfect, even frustrating in a few minor places. But well get to criticisms after highlighting several other standouts among the ten tracks. Looking For Christmas is undeniably Jon Foreman lyrically, forlornly intoning in the chorus introspectively, Im still looking for Christmas/Tell me what Christmas means/Tell me whats the worth/Singing peace on earth/When theres war on the TV screen? The only issue I have with the song is its placement right after the joyous opener. It drags the mood down immediately only to be jerked back up with Scrappy Little Christmas Tree (with its Oh! Gravity era sound) and then dropped low again mood-wise with Midlife Christmas. This is a shame because both, if sequenced differently, would have caused them to shine brighter, and the album to feel more cohesive. These are still good songs, but they could have been great.

As it is, with all the originals making up the first five tracks and the covers the final five, it was going to be a potentially dichotomous listen. (The band was also going for a Side A / Side B approach with originals on top and covers on the flip side. -- Editor) After a few times through the album, I find that to be true. It almost lends itself better to have been two separate EPs. Lastly, the previously written (around 2008 if memory serves), though unreleased, fan favorite New Year's Day makes an appearance utilizing the sonics of Interrobang. Swirling strings and fuzzy guitars make for a top-three offering of the record. If I were to re-sequence the tracklist, this would make for a great closer or even a second-to-last song, with O Little Town of Bethlehem ending it.

The offerings from the second half that had stubborn staying power can be found among the world-weariness found in Silent Night/It Came Upon a Midnight Clear, and closer O Little Town of Bethlehem. Silent Night/It Came Upon a Midnight Clear benefited from a handful of listens as I began to appreciate the warbled piano line that I missed the first time through. The gentle pluck of the ukulele with the piano and plaintive lyrics, like O holy Child of Bethlehem/Descend to us, we pray/Cast out our sin and enter in/Be born to us today, end the album on a hopeful note.

Ultimately, its small gripes with track order and two unnecessary inclusions, like Christmastime is Here and The Christmas Song, that drag the album down most. Why not mix up the originals and the covers? That, and the overall mood of the record has me playfully joshing the fellas that an alternate title for their album could have been This is Our Melancholy Christmas EP. Its not necessarily a problem, but the Switchfoot boys have never sounded more worn down to my ears. All in all, though, Im glad a full slate of Switchfoot Christmas songs have been recorded, as Im always glad for new music from one of my favorite long-time bands. Fellow fans rejoice, for Christmas has come a little early in 2022.

Switchfoot deserve some serious kudos for not including "Evergreen" on this is our Christmas album, seeing how "Evergreen" is the primary reason that fans have been clamoring for the rock band to release a Christmas album since the late 90's. Such an inclusion would've signalled that this holiday collection was a phoned-in, lazily assembled work of compulsory obligation. Instead, this is our Christmas album is a thoughtful work of emotional complexity that follows nicely on the heels of 2021's interrobang, carrying the torch of that LP's fuzzy garage rock. Even better, the band's original songs are largely as first-rate as anything from the last few albums. They're weird, adventurous, and surprising, especially on the opening track, "California Christmas." The covers of Christmas standards are strong as well; the mash-up of "Silent Night" and "It Came Upon a Midnight Clear" was a stroke of genius, with the latter injecting life into what can easily become one of the most boring and tedious carols. These covers help keep the set Christ-centered, while the originals explore concepts of consumerism, disillusionment, and struggling to reconcile the peace we see around us with the "peace on earth" we sing about so much every December. The album's only serious flaw is its tracklisting: the vinyl and CD versions are split between "songs we wrote" and "songs we didn't," which I imagine works far better on vinyl than on CD, meanwhile the streaming version made a big mistake not ending with the set's only logical closer, "New Year's Day." Nitpicks aside, I couldn't have asked for more. - Review date: 11/12/22, Chase Tremaine of Jesusfreakhideout.com