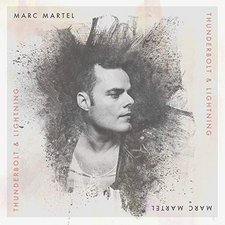 
Many fans of Christian alternative will know Marc Martel as the lead vocalist for Downhere, but as a solo artist, he's shown that he can hold his own in the classic rock world too. A good portion of Martel's post-Downhere days have been spent working with the official Queen tribute band, Queen Extravaganza, with Martel's incredible vocals fitting right in (Martel even leant his vocal talents for some of the singing in the film about Mercury, Bohemian Rhapsody). For Thunderbolt and Lightning, Martel steps into Freddie Mercury's shoes once again for eight Queen covers that are modern while being faithful to the originals.

The album starts with "Bohemian Rhapsody." It's a decent cover, and Martel's vocals are top-notch, but purists among us may be bothered that the iconic guitar solo is replaced by a string section. Elsewhere in the song, strings give some nice dramatic flair, but the solo feels wimpy without the guitar. Also, during the "Mamaif I'm not back again this time tomorrow" section, there are some weird harmonies and effects that don't feel necessary. Marc's voice is awesome by itself, without any tampering or layering. In any case, these minor annoyances, though a little distracting, don't ruin this cover because there's a lot to like about it, too. Thankfully, the "Galileo's" and "magnifico's" are as great as ever!

Next is "We are the Champions," which has a noticeably modern feel to it that works really well. Whereas "Bohemian Rhapsody" felt a bit indecisive, as though it wasn't sure whether it wanted to be modern or retro, "We are the Champions" feels self-assured. The big kick with a thin, echoing snare wouldn't be out of place in an Imagine Dragons song, but none of these elements detract from Martel's Freddie Mercury-worthy performance. Actually, they emphasize his voice. The one possible downside is the absence of the guitar solo, but there's something to be said for this version making its own way and letting the original be the original.

"Love of My Life" sounds as beautiful as ever, though the string section sometimes seems a little heavy-handed compared to the original piano and subtle electric guitar. Maybe it's a preference issue, but the instrumental arrangement, especially when the timpani comes in, is too dramatic for this delicate song. Production aside, Marc gives another stellar performance.

As solid as the previous two songs are, his version of "Under Pressure," featuring Kevin Max, might be the best song on the album. Not only does Marc nail every note, but the arrangement isn't intrusive at all. And, while it's true that K-Max doesn't sound like David Bowie in the way that Martel sounds like Mercury, he and his vibrato are definitely up to the task.

Like "Under Pressure," "Don't Stop Me Now" and "You Take My Breath Away" are very faithful in tone to the originals. "Don't Stop Me Now" is more bass drum-heavy than Queen's version, while the only real difference between the two versions of "You Take My Breath Away" is that the solo is played by a cello instead of an electric guitar. This goes with the album's overall style and doesn't get in the way like the strings did in "Bohemian Rhapsody" and "Love of My Life."

"Somebody to Love" could, like "Bohemian Rhapsody," be a sticking point for Queen purists because of the cliché effects that don't add anything to the song. But, apart from that, Martel makes cool tweaks, such as replacing the "somebody to love" chant near the song's end with a piano-based section that gives those words more space. The final track, "We are the Champions - Reprise" winds up the album nicely as Martel accompanies himself with only a piano.

Throughout Thunderbolt and Lightning, it's obvious that Marc Martel loves Queen. No one can say he doesn't give it his all on this album, and no nitpicking critic can deny that it's a labor of love. Any fan of Queen or Downhere should definitely give this one a listen!