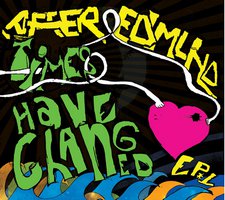 After Edmund
Times Have Changed EP #1

After Edmund released their debut album, Hello, back in 2008. The album had plenty of hype leading to its release and did a nice job of meeting expectations with a solid alt-rock album. Fast forward three years and the band is back on the radar (or perhaps flying a little beneath it) with their independent EP, Times Have Changed EP #1.

Those who loved After Edmund's best tracks, "Thank God," "Fighting For Your Heart (Let It Go)," and "Clouds," will be in for a bit of a surprise if they put in their new EP expecting a similar rock sound. The first four songs may best be described as a mash up between Family Force 5, Queens Club, and eleventyseven. "Human Nature" starts off the album with lots of synth, enhanced vocals, and a strong dance influence. Some of its twists in the bridge come out well, but the chorus can wear down the wrong listener. "Sunshine" ends up sounding more like the After Edmund from 2008, but the techno-fueled pop song also has the dance beat. The catchiest song on the EP is "Dance Like You're From The Future" which is an electronically-fused pop rock track that has a good beat, but may rub some the wrong way for seeming a bit too cliché. The overly poppy "Monster" feels innovative when the track slows down, but its refrain is too just too corny to be taken seriously. However, the instrumental, piano-driven "Klavierzeiten" brings a melancholy tone that halts the dance momentum and effectively captures the listener's attention. It provides a smooth transition into the final track, "Times Have Changed," which is a good ballad with a small experimental edge.

After Edmunds deals with a number of themes on Times Have Changed EP #1. "Human Nature" is an assumed call-out to God to rid the singer of his fleshly weaknesses, while "Sunshine" acts as a straight praise and worship song ("Your love came down/it feels like the sunshine your love is so deep and divine"). "Monster" admits "I need you to break these chains" after looking at a pair of examples of people stuck in a hopeless cycle. The title track is also thoughtful, but there isn't much substance found in "Dance Like You're From The Future."

It's really unfortunate that a group with as much potential as After Edmund would have only a six song EP to show for their three-year absence (Not counting a remix project in 2009). But for an EP, Times Have Changed is entertaining even if it does resort to some unoriginal techno sounds. I sincerely hope there is more on the way soon from After Edmund.