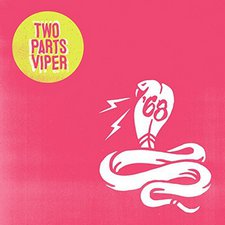 
It's always interesting when members of different bands join forces to create an entirely new project. It's a lot more interesting when it's members of powerhouses in their respective genres. So when Michael McClellan of Becoming the Archetype teamed up with Josh Scogin of The Chariot, it was a no-brainer that fans were going to get something truly amazing. And that's what '68 delivered in 2014 with their debut, In Humor and Sadness. Combined with an intense live show, the duo really made a name for themselves in the wake of their other bands' demises. Their legacy continues with their sophomore outing, Two Parts Viper.

In Humor and Sadness established that '68 is a less musically-intense band than The Chariot or BTA. Two Parts Viper follows suit, as the heavy riffs and pounding drums share record space with bluesy guitar riffs, grunge tendencies, and more clean vocals from Scogin than we've heard in one sitting since his A Rose By Any Other Name album. There are even some songs that are entirely or mostly sung with minimal screaming. "Without Any Words (Only Crying and Laughter)" bares a sound that's vaguely familiar to Nirvana's "About A Girl," while "The Workers Are Few" cranks it up and adds a little more southern rock to the mixture. The blues and southern rock aspects sound influenced by groups like The Black Keys and The White Stripes (particularly some of the bass effects and guitar riffs in "Death Is A Lottery").

Scogin's singing voice is definitely a welcome sound in these songs, but I'd be lying if I said I wasn't excited to hear the heavier stuff as well. Scogin's screams are iconic at this point, and it brings a lot of personality to '68. I could listen to "Whether Terrified or Unafraid" and "This Life Is Old, New, Borrowed, and Blue" all day, gorging myself on heavier vibes. But even when the vocals get heavier, the music rarely comes close to hardcore or even southern metal territory, which are the two genres that would make the most sense for this record to delve into, especially with someone like McClellan on the drums. If you're familiar with Becoming the Archetype, you know what I mean. Though he wasn't with the band long, he had some big drums to fill. McClellan keeps up with Two Parts Viper as it changes from grunge to hard rock to electronic, and even when the song throws in something random, like the odd vocal track smack in the middle of "The Life Is Old, New, Borrowed, and Blue" or when a song has a false start before legitimately jumping in.

Longtime Scogin fans will know that, a lot of the time, his lyrics are vague or left up to the listener's interpretation, but still often convey the hope found in Jesus. Two Parts Viper is an album with a lot of character, and some of that character comes from the lyricism. I'd be remiss if I didn't specifically mention two of my favorite portions:

"My bad, I was merely trying to dance with you, my bad, I was only tryihg to tell the truth, surprise, I can barely even look at you, I'm moving so fast, I've got a hundred thousand things to do" - "This Life Is Old, New, Borrowed, and Blue"

This time, "up to the listener's interpretation" is a lot more accurate, as most of the songs' meanings aren't easily distinguishable. However, even though we may not completely understand what each song is about, "What More Can I Say" says, "I've got lyrics that don't mean anything to you, but they mean so much to me." Maybe that's all we need to hear to just enjoy the album for what it is.

It may still be a new entity, but with the songwriting prowess and musicianship of Scogin and McClellan, '68 is already proving to be an act worth following. Two Parts Viper is a strong addition to what will no doubt go down as a stunning discography. If you haven't discoverd '68 yet--but a cornucopia of grunge, southern rock, and hard rock sounds interesting to you--don't hesitate to pick up a copy of both albums. If you're already a fan, then Two Parts Viper is probably already in your possession.

I'm unsure whether Christian music was begging for a two-man blues rock band in the spirit of the White Stripes and the Black Keys, but that's what we got with '68. Looking at the big picture, we don't get anything here that's different than the guitar riffs and bare bones mentality of the aforementioned artists. It's in the minor details that '68 does things you've probably never heard before, and the chopped and screwed sounds make for interesting moments. It's too bad that the ideas here don't often add up to cohesively enjoyable songs. The obvious highlight, "Death is a Lottery," channels Queens of the Stone Age for a more straightforward hard rock song, resulting in the album's catchiest chorus. The album's middle pair, "No Montage" and "No Apologies," shows the range of Josh Scogin's vocal delivery: talking bits, bluesy singing, hardcore screams, and atonal yelps. It seems only a small number of listeners could like everything here, (especially the annoying "whoo!"s repeated throughout the first two tracks), but if '68 can avoid misfires like the overblown, would-be-epic closer "What More Can I Say," and consolidate their approach, they'll be able to stand tall beside like-minded two-man-band contemporaries Royal Blood and Death From Above 1979. - 6/7/17 Chase Tremaine

Deliciously chaotic, '68 is clearly having a blast on their sophomore offering, Two Parts Viper. Though it may not save rock n roll, they certainly make enough noise to make the music world sit up and take notice. These two fellas put the "raw" in rock. This one caught me off guard and I cannot stop listening! - 6/10/17 Josh Balogh