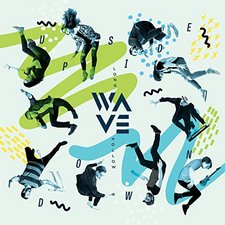 
Long Hollow WAVE's new album Upside Down is the fruit of a growing ministry that not only wishes to provide worshipful music to a younger generation but also greatly desires to build up young, passionate, doctrinally-sound worship leaders, songwriters, and musicians. Aside from making well-crafted music, there are two especially commendable aspects of what the youth ministry is doing at Hendersonville, Tennessee's Long Hollow Baptist Church: one, they're making worship music for teenagers without pandering to them (lyrically or theologically), and two, they're making worship music by teenagers.

Over half of the songs on Upside Down have writing credits from the very middle school and high schoolers that these songs were being written for. There are upwards of thirty students in those ministries who are helping to lead worship and write worship songs for their church. During the process of writing this review, I had the pleasure of getting to visit Long Hollow's main campus, and I got to see a band made up of three church staff members and three wildly talented teenagers, leading a packed house of students in worship with a mix of popular songs and songs from this album. I was also told that some of these songs will be used in the church's main services on Sunday. I can only imagine what it would feel like for 15-year-olds to be surrounded by adults, seeing how a song they wrote is now being used to serve their entire church to worship our Lord.

Stylistically, these songs are very modern. Half of the tracks find a perfect balance between worship music and dance music, between reverence and fun. Even the slower songs are synth-driven, with beats and dubstep samples perfectly crafted for 2017. Much of this is thanks to Brandon Sharp, the worship leader who lends his charming voice to four songs (most notably the title track and the disarmingly gorgeous "Meet Me In This Moment"), who produced the album. The synthetic instruments leave plenty of space for real instruments, though, and listeners may be shocked by how many jazzy bass licks and creatively dynamic drum beats are thrown into these tracks, especially at the finales. Justin Greer, the lead vocalist on "Mystery," did a great job recording and engineering all the electric guitars for the album, adding sonic weight to each track. But the real standout of the live portion of the album is Caitie Hurst, who sings on five of the seven live tracks, including album highlight "God Over All." Her bravura voice falls somewhere between Demi Lovato and Bethel's Amanda Cook, but her non-flashy style only seems to steal attention accidentally, whereas her passion and prowess is clearly directed to God throughout her performances.

For anyone tired of man-centric worship lyrics, where God seems content to make us happy whenever we conjure him to do so, look no further than the aforementioned "God Over All," a single originally released on Election Day 2016, where Hurst sings, "I rest in your sovereignty / For my good and your glory." These songs always put the focus on Christ. On "Promises," listeners are encouraged to hold on to God's promises, but the bridge makes a lyrical switch, confessing that Christ himself is the fulfillment of God's promises, and it sends shivers down my spine when I hear it. Christ is exalted and man is not. "Mystery" is honest enough to say that we were "enemies" of God before He saved us, and while there's a desire for revival throughout this album, there's also the recognition that revival must begin in each of our hearts.

The only big problem with Upside Down is the awkward transition it makes from live tracks into the three studio tracks that end off the album. The sudden disappearance of crowd noises is jarring, making the last tracks sound too clean, in spite of still being immaculately produced. Thankfully, the songwriting doesn't drop off. Brodes Hartley, the singer on the album's jam of an opener, "You Are My Revival," returns to provide the earworm chorus of "Focus," and Sharp handles the other two non-live tracks. In all, this album ends up more like two EPs back-to-back than a full album, but even if that were the case, these would be two fantastic EPs that could help curb the unhealthy trends of modern worship music, for kids and adults alike, without attempting to completely rewrite the rule book.