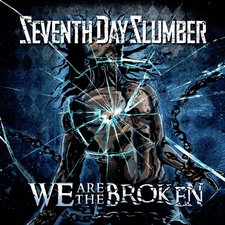 Seventh Day Slumber
We Are The Broken

Seventh Day Slumber had been with BEC Recordings since 2005, spending most of their career as a known commodity. Since 2009, the guys have basically been doing worship music as a full-time gig. 2014 appears to be a year of change for these industry veterans though. The band has left their long-time home for VSR Music Group (distributed by Capitol Christian Distribution). With a change in venue has also come a change in sound. Many 7DS fans have been clamoring for another true rock album, along the lines of Once Upon a Shattered Life or Finally Awake, from the band. While some of their worship material undoubtedly has a rock edge, it doesn't share the same aggression as their older material.

We Are the Broken is an interesting foray. The first thing I noticed is its brevity. The album has only 9 songs and clocks in at just over 31 minutes in length. With many EPs these days reaching up to 7 tracks, or even more in some cases, it's a bit strange to see a "full-length" LP only include 9. The next thing of note is the unexpected Demi Lovato cover of "Skyscraper." The group adds a softer rock feel to Demi's personal struggles from a past laden with bullying. Perhaps the most awkward moments comes in the final original number. During the bridge of "Holding On," Rojas sings the lyric, "Breathe your life in me." The lyrics themselves, as well as the inflection Rojas gives the words, are eerily similar to that of Michael Barnes singing, "Breathe your life into me," in the hit "Breathe Into Me" from Red's debut album.

As a whole, the album is definitely a return to their older form. The opener, "Goodbye," has a nice little guitar riff to get things going. The title track is a rock anthem, and songs like "Nothing to Lose," "In Too Deep," "Comatose State," and "Holding On" are also harder rockers. "All She Wants" and "Skyscrapers" are softer rock tunes and "Trust in Me" is an acoustic track that has a feel of something like "Caroline" or "Oceans From the Rain" from Once Upon a Shattered Life -- it's also the closest thing to a worship song to be found.

It seems that Seventh Day Slumber has put forth a conscious effort to release a regular rock album. It's a record that won't alienate fans who came on board since 2009 and it will surely make long-time fans happy. I wouldn't say 7DS has reached new heights, but We Are the Broken is a solid step in the right direction. A band whose older fans were getting bored seems revitalized after the label swap. There are some missteps along the way (especially the extremely short length), but the record certainly offers an enjoyable listen. The rock genre in general has become stagnant across the board, but perhaps a band like Seventh Day Slumber will have the ability to bring it back into the forefront of the Christian market. I'm excited to see where the band goes from here.

After spending the last few years trying their hand at worship music, Seventh Day Slumber returns to their rock roots with We Are the Broken. Fans will be happy with the return to rock but maybe a little dismayed at only a 9 track album. Not only does this release barely run over 30 minutes, it also could be shortened further by the fact that one of those tracks is a Demi Lovato cover, "Skyscraper." I enjoyed the guitar riff on the opening track "Goodbye" a lot more before I realized how similar all the other riffs on the album were. In fact, there are times you may not realize it's a new song since the music and lyrical content are so similar from track to track. A little more lyrical and musical variety could have made this a more triumphant return to rock for 7DS. - Review date: 6/2/14, Matthew Morris