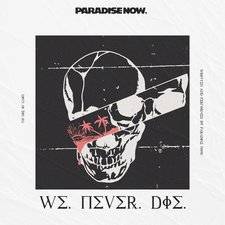 
After almost a two-year delay due to the pandemic, the British boys in Paradise Now have finally released their debut LP on Tooth & Nail, titled We Never Die. The band blends a unique mixture consisting of rock, pop, and electronic elements, setting them apart from others in the genre. This album includes five tracks from their two previous EP's, along with six new tunes to finish off an 11-track outing.

We Never Die kicks off with Paradise Now's heaviest track to date, "Bring Me His Head," which has Sam Taylor screaming "Bring me his head, bring me his head on a platter" during the chorus. Fans will instantly recognize the catchy "Supernatural," as it was the title track for their first EP in 2019. "Heaven Close" serves as a solid slow-builder, and showcases the group's spiritual side with lyrics drawn directly from 1 Corinthians 15: "Death has lost its guarantee / so much life in front of me / I just wanna' be where the light is seen / I can feel the light in me."

"Criminal" and "Monsters" are pulled from their Lockdown Mixtape, and despite the stronger electronic approach, they fit relatively well inside this record. Both "I Hope It Never Ends" and "Losing Myself" are new additions, and embrace that classic Paradise Now sound. The former features Taylor's honest lyricism, as he sings "I'm so wicked, I'm so selfish / With all of the thoughts in my head / I'm so needy, I'm so greedy / I wish I was better instead."

Normally, an album won't close with some of the band's best songs. In this case, however, that stereotype is ignored. The riff-heavy "Baptist" is a fan favorite, as Taylor belts out "Can you hold me down / Till my blood runs clean / You gotta save me now / Will you baptize me?". "Young Guns" is an energetic tune, and helps maintain an upbeat pace down the stretch. Things close out with the title track, which seamlessly meshes massive riffs with a radio ready chorus, ending the project with a bang.

In conclusion, Paradise Now has successfully crafted an enjoyable debut record, one that puts the band in an excellent position moving forward. There is plenty of variety to be found here, but the sound is cohesive and clearly stays their own the entire time. For fans of the group, or listeners looking to expand their tastes in rock, We Never Die comes highly recommended.