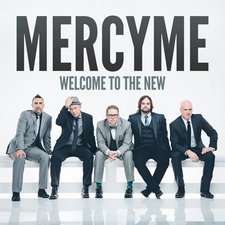 MercyMe
Welcome To The New

It is no great secret that one of the biggest drawbacks of many of today's most popular artists in CCM is monotony in sound and style. Who amongst CCM fans hasn't turned on a Christian radio station and, upon hearing a song otherwise unknown to them, been able to predict the general song structure, dynamic shifts, vocal changes, or even amount of lyrical repetition of whatever song is gracing their ears? In the past, MercyMe has not been innocent of perpetuating that flaw, as they have arguably seen more success on CCM radio in the past decade than any other artist (with 11 Billboard chart-toppers serving as evidence). However, they have also shown more willingness to throw a changeup from time to time than most AC/Pop artists, with one notable example being their quick-tempo driving pop song "Move" from their 2010 effort The Generous Mr. Lovewell, which broke many Christian radio stereotypes and still saw considerable success. Now in 2014, the group has teamed up with the diverse production and composition team of Soli Olds (yes, Mr. Soul Glow Activatur himself, formerly of Family Force 5), Ben Glover and Dave Garcia to break the aforementioned monotony, and the result of that effort is the aptly-titled Welcome To The New.

What MercyMe has offered us on Welcome To The New is a highly eclectic collection of different sounds that altogether make a statement that they had no intention of making an album simply destined as a vehicle for radio hits. Many have already gotten a taste of this statement with their jazzy lead single "Shake." I, for one, was completely taken off guard by this choice for a lead single, and was unsure what to think of it (not to mention I was unimpressed by the lyrics; what exactly does it mean to "shake like you are changed"?). But the jazziness of "Shake" is just one of those seemingly bizarre sounds that the band creates on this record, including bringing in some R&B, gospel, country, folk pop, and (of course) their familiar brand of AC. Arguably, no genre could accurately describe consecutive songs on the tracklist. This makes sense as the album's whole theme revolves around the concept of change and the eclectic mix of styles the album offers speaks volumes to that effect as well. Change is also the most powerful lyrical theme as well, with every song, from the opening title track ("It's like you're seeing grace / In a brand new light / For the first time") to the finishing "Dear Younger Me" ("Dear younger me  do I go deep / And try to change / The choices that you'll make 'cause they're choices that made me"), talking about change and being made new in some capacity. This album is lyrically MercyMe's most cohesive and impressive effort in some time.

Unfortunately, this album's greatest opponent could end up being itself. There is a fine line between making an artistic statement, and simply being chaotic and unorganized, and with the seemingly wild jumping from style to style between songs, Welcome To The New flirts with it. Not to mention, there is an inherent risk whenever a band undergoes a significant stylistic shift and it's that it merely changes for the sake of change, and the final result is simply an inferior version of the genre (or genres) they are attempting to mimic. Personally, I have mixed towards the final execution of MercyMe's stylistic shift; while it is undoubtedly a new creative direction for the band that fulfills their mission of breaking the monotony inherent in their fan base, these songs serve as mere appetizers for the genres they are propagating, and may not hold up well under the more scrutinizing ears of outsiders and fans of these aforementioned genres.

The first several listens to the album left me impressed, but subsequent listens seemed to make the flaws speak louder and louder. In all likelihood, the amount of scrutiny one gives to the appetizer-sized execution of the diverse musical styles offered within will likely correlate strongly to how much one enjoys this album, either serving as its biggest strength or its downfall in the listener's eyes. But one can only admire the amount of flair offered by the veteran band on their 8th album in throwing expectations out the door and giving something new to their usual audience. Without a doubt, Welcome To The New is worth a try for any fan of Christian music, and while many will be put off by it, many more will love it.