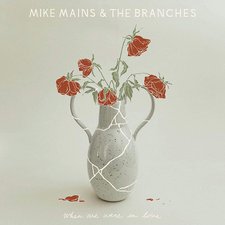 Mike Mains & The Branches
When We Were in Love


At the turn of the decade, Mike Mains and the Branches was quickly becoming one of the most promising and notable acts in the indie-rock sphere. Having a remarkable knack for infectious hooks paired with Mike's high-strung vocals that often delivered a surprisingly fierce scream, Home was a stellar pop/rock debut that possessed a rare but highly effective edge. The band's follow-up came four years later in the form of Calm Down, Everything Is Fine, which was a decidedly more pop-oriented venture overall. It had been a little over five years since the group released their sophomore project, but after a recent signing with Tooth and Nail, things were finally beginning to move once again. So, what did we get with When We Were In Love? The answer is a splendid feel-good pop record full of romantic sentimentalism, a dash of melancholy, and undeniably good hooks.

As a songwriter, Mike Mains has never been one to shy away from the darker moments of life, as was present on songs such as "When Love Dies" or "Burn" from Calm Down, Everything Is Fine. But that willingness to peer into the thoughts and feelings we'd much rather keep buried were always contrasted with an infectious and empathetic sense of optimism and hope (hence the tongue in cheek title and titular song of their sophomore record). When We Were In Love is no different in this regard, as most of the record was written during a tumultuous time in the marriage of Mike Mains and his wife and bandmate, Shannon. In the face of a disheartening foundation, however, is a batch of songs that deliver a profound reminder that life, in all of its forms, is to be celebrated.

The music itself is the group's most polished and pop-driven effort to date, boasting beautifully structured hooks and unexpected depth that start to reveal itself with each subsequent listen. Mike clearly has an ear for melody and this is especially present in moments such as the repeated refrain of the opening track, "Pouring Rain," and the utterly delightful "Live Forever." Lead single "Endless Summer" hooked me immediately with its breezy and laid-back vibe. The final string of songs, beginning from "Only Thing I Need" to "Back To Your Heart," only continue to perfect the band's latest direction, each song just as memorable and catchy as the last.

"Breathing Underwater" is a deceptively sweet song with a fantastic groove that details Mike's painful sessions with his therapist during the time, "Now my brain is in a vice grip / He's taking lots of notes / Telling me I'm making progress / I broke everything / I'm a zombie on the sidewalk / Stumble into strangers / Thinking about kissing the traffic / God, it'd be so quick." "Swamp" is a pensive ballad that brings the record to a sombre close as Mike and Shannon echo to each other the question, "Do you remember when we were in love?" It's a question that encapsulates the record's theme as a whole. A question that is full of longing and hope that things can, and will, be made new again. Overall, When We Were In Love has little to complain about aside from a few measly nitpicks. "Holy Ghost" and "Around the Corner," for example, sound a little derivative and sub-standard compared to the rest of the album, despite being more than fine pieces on their own.

Mr. Mains and the Branches have a fine, fine record on their hands here and one they should be immensely proud of. It's among the best pop records I've heard in quite some time and deserves every bit of your attention.