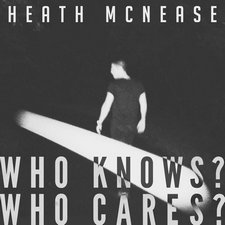 Heath McNease
Who Knows? Who Cares?


Another day, another stellar Heath McNease release. While 2016 hasn't exactly been his busiest year volume-wise, he has kept himself busy in other ways, not only with touring and putting out singles, but also with keeping all his followers on their toes for his latest commentaries (which are worth reading and listening to for people of all opinions). Just before his latest project, the prolific rapper/singer/songwriter took to Facebook to reveal the reality faced by independent artists (and specifically himself) when it comes to releasing and promoting music online. It is a very worthwhile read, and can shed a bit of light on his newest project, an EP entitled Who Knows? Who Cares?

McNease may be a talented and accomplished musician, but it would behoove people to remember he is first and foremost a music fan. And one of the things he loves doing is paying tribute to many of his favorite artists through featuring their work in his music. This time around, McNease uses music from the Local Native's first album, Gorilla Manor, as the basis for his work, with several song titles even remaining intact. But while the Local Natives have great-sounding music themselves, what McNease has been able to do to make this project truly his own is equally impressive. At the same time, while the auditory aestetic is great, the lyrics themselves fulfil the daunting task of outdoing the mixing and re-imagining of the Local Native's original samples. McNease has always been an impressive lyricist, but Who Knows? Who Cares? might be his best work in that regard. Filled to the brim with well-explored ponderings and mired in a battle between hope and despair that is thoroughly relatable, some of the many philosophical one-liners are worthy of spiritual reflection in and of themselves. The title track contains a great lyric, saying "I can't add a single hour to my life, but I'm convinced that if I could, I'd spend it counting down the time," and the lead single "Wide Eyed Skeleton" cynically espouses "I can barely tell that I'm awake / Wandering with no concept of night or day / I can barely tell I'm even breathing / I can barely tell that I'm alive." The track "13:15" might contain the most impressive lyrical content of all, though, as a spiritual exploration of the themes of the Book of Job (the title itself refers to Job 13:15, "Though He slay me, yet I will trust him"), and would be a worthwhile listen even if the backing music was terrible (which is most definitely not an issue). And other lyrical highlights abound throughout the whole record.

The lyrics only slightly outdo the backing tracks. Each song is re-mixed and re-imagined from a Local Native song, but while the original samples were solid to start with, the transformation of these decidedly indie pop/rock tracks into beat-filled rap tracks took talent. A lot of thanks for that would have to go to the producer Jordan Coleman, who engineered and mixed the tracks and provided additional instrumentation. Sonically, it might be the most unique-sounding project in McNease's catalogue. In less confident hands, this project could have suffered from its interesting experimentation, but instead it soundly delivers, to the extent that it might actually be McNease's best-sounding project in addition to his best-written one. This perfect marriage is most evident in the aforementioned "13:15," which thanks to both its quality lyrics and the incredible transformation of LN's song "World News," has leapt towards the front of the pack for both my favorite Heath McNease song and favorite song of 2016.

The modest 27-minute timeframe of this EP may definitely leave the listener thirsting for more, but the length is probably appropriate for this type of project. These seven tracks by themselves leave a lot to unpack, and while I'm sure more would be welcome, it might be a lot for one listen. Still, this is a fantastic project from start to finish, and as per McNease's MO, it is available for free to whomever will listen. But I know that he would appreciate (and indeed, this project is easily worth) any donation that you would decide to give it.