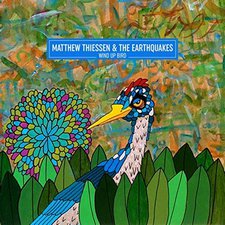 Matthew Thiessen And The Earthquakes
Wind Up Bird


Matthew Thiessen and the Earthquakes is a band name that has been floating around for at least 17 years at this point. My first recollection of the name is from 2001s Happy Christmas, Vol. 3 compilation. The song I Hate Christmas Parties, later released on Relient Ks own Christmas album, was first credited to Matthew Thiessen and the Earthquakes. Since that time I, along with many other fans, have been eagerly waiting for an Earthquakes album to no avail; most thought it would never happen, as it seemed Thiessen felt comfortable to do almost anything he wanted through Relient K after breaking away from the pop/punk sound. However, 2018 is the year that this project finally comes to fruition. What was anticipated as a piano-laden release is actually chock-full of acoustic guitar and trumpet with very little piano included at all.

The album opens up with Dude, which sort of seems like Man, Pt. 2 with a very similar theme to the song Man from Relient K's Air For Free. Thiessen sings, Shouldve known by now; shouldve grown into a full-size dude. If youre locked in a cage, who is coming to save you? The playful opener leads into the more serious sounding first song released from the album, Man of Stone. The guitar features a great finger-picked melody with a lot of heavy hammer-ons for accents. As the song progresses, a trumpet enters into the mix prominently and adds a great sound that you wont get from Relient K. Forest (inspired by Roger Millers Robin Hood and Little John) follows and is an album favorite, as Thiessen sings about Robin Hood and Little John -- and of course, Maid Marian. Ellie Schmidly gets her first extended look on vocals in this song and she is fantastic. The track is super smooth sounding (the bass, guitar, and trumpet fit perfectly together) and features an excellent groove. Oedipus (a Greek mythological hero with a tragic tale) is up next and talks about unfulfilled dreams and lifes quick passing. The reversed content starting at the 2:44 mark is simply the lyric ...by so fast followed by extended ooohs. Closing in on the half-way mark, we find another great song in Climb. The acoustic based number has a really catchy rhythm and features Thiessen with one of his best vocal performances on the album. Mothers Triumph continues the album in a very positive direction and was written for Matts mother-in-law.

Possibly the strangest song on the album is Higher Power. Matt uses a lot of silly words and its meaning has eluded me since the day my pre-order CD arrived. He sings, Oh wont you let me be your higher power? Golly-gee-willickers I got the hee-bee-gee bone-chilling feely-burs right up my spiney-sleeve. Don't know what I should do. Don't know if I believe. It could be up to you. Clearly its up to me to be happy and loving and gracious and kind to the people and good to the places where I can live whole-hearted days full of sweet, sweet joy. Ellies part comes after and seemingly goes in an entirely different direction, before coming back to those same opening lyrics. Its a nice song with a lot of piano, but it may land as a little awkward to some. Clean Sweep is another exceptional song, and with some electric guitars and overdrive it could easily be a Relient K tune.

Im Gonna Cry starts the wind down of the album, and while there is no piano to be found, its the most like what I initially expected from a Matthew Thiessen and the Earthquakes song. Matt is being a little vulnerable on this one as he sings, I dont wanna die all by myself. Im gonna cry out for your help. Its a slower acoustic guitar number and has a great melody and flow with some killer harmonies. The title track is another different type of song with some silly non-existence words (the call of the wind up bird) thrown in throughout that go along with fairytale theme set up early in the lyrics. It is, however, a very catchy, albeit whimsical, track. The album closes with another strong appearance from Ellie Schmidly in Daydream. Matt and Ellie sing together in harmony for almost the entire run time until Ellie finally closes it out alone.

So, is Matthew Thiessen and the Earthquakes' debut, and very possibly lone, album worth the 17-year-or-so wait? The answer is a resounding yes. While, stylistically, its nothing like I every wouldve imagined, Matt Thiessen, coupled with Ellie Schimdly, really knock it out of the park. The music has an interesting folk/rock and jazz fusion and is undeniably fun to listen to from top to bottom. The guitars and vocals are very folksy, but when the trumpet cuts through this mix, the music gets this shade of jazz the blends wonderfully.

Wind Up Bird is an album of whimsy and fun that you cant help but listen to over and over again. Since this album arrived in my mailbox, Ive barely listened to anything else. MUTEMATH's Darren King did a phenomenal job producing the album as well. A couple of oddities here and there keep it from being a perfect album for this reviewer, but its a remarkable album overall. I cannot recommend listening to this one enough.