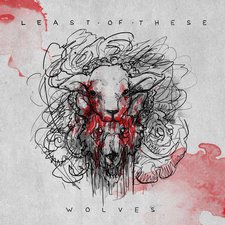 Least of These
Wolves EP


Wolves arrives as the follow-up to Mere Image, the 2015 full-length from Denton, TX post-hardcore quartet Least of These. Musically, not much has changed in the past two years. The band's incredible musicianship is still front-and-center, this time in a conceptual six-song set that carries the torch of other loud-quiet, sing-screamy artists like Beloved, Emery, As Cities Burn, Edison Glass, and Thrice. Such a long list doesn't even feel exhaustive, though. An equally enjoyable and frustrating aspect of Wolves is how the band wears its influences on its sleeve, inviting fans of the genre to make comparisons but restraining Least of These from forging its own identity.

The EP begins with "Cleo," jumping straight into one of Wolves' essential flaws: an abandonment of typical song structures. Huge gang vocals appear at the onset, and it should sound epic. Yet, by starting the song, not to mention the whole EP, so big, the section feels unearned. "Cleo" doesn't come into its own until halfway through, during a verse (if it can be called a "verse") that stands as one of this EP's most beautiful and memorable segments. With the catchy line, "If you'd only listen / I'm talking straight to you," this sequence could have been a captivating way to start the song, and I honestly wanted to hear it more than just once (i.e., first verse, second verse). With these criticisms, I am by no means suggesting that all songs by all artists need to fit a verse-chorus template, but there's certainly an art to understanding why song structures work and what makes disparate pieces of music "click" together. The next two tracks follow suit, showcasing some stellar guitar work and beautiful screams (particularly on "Paradox") that fail to coalesce into cohesive songs.

To be clear, Wolves is well-produced, consistently impressive, and sometimes even beautiful. The title track features a mathy, angular guitar solo reminiscent of Mew's iconic "The Zookeeper's Boy," and the closer, "Cadence," briefly hits As Tall As Lions-levels of transcendence. The issue here is not one of quality but of impact. The second notable hindrance is the melody-writing of the singers. Nothing on Wolves has a hook the way "Compassion" off of Mere Image did. Personally, it took four listens of the EP before any of the melodies stuck. They lack a good punch, and sometimes the lyrics are oddly worded or sung unconvincingly. At a few points, a stilted performance matches with an awkward lyric ("Goodbye my friend / I've had such a good time / Thank you so much / For distracting my mind") and completely falls flat.

Thankfully, shortcomings aside, this EP is greater than the sum of its parts. Where songs may fail, the EP works as a conceptual whole, crafted to be heard in one nonstop 26-minute experience. Each song segues seamlessly into the next. The transitions in and out of "Winter" are particularly effective, nearly haunting. And much like "Cleo," the song "Cadence" starts off big, but this time, it feels earned; this is entirely because, as the song title would suggest, "Cadence" functions as Part 2 to "Wolves" the song and Part 6 to Wolves the EP. These last two tracks, in particular, introduce the most interesting lyrics, switching from a cry of, "The wolves are out here," to the declaration, "We are the wolves!" Other interesting concepts float through "Cadence," with lines like, "We all want love / And hate those who don't," and "What happened to grace? / Could it be we're wrong here?" By the time this song ends, the strengths of the EP more than make up for the weaknesses of a few tracks. Least of These possess musicianship and potential worthy of attention, even if listening to Wolves makes you want to listen to a bunch of other great artists.

Drawing comparisons to the guitars of As Cities Burn, former Come & Live band Least of These is back with their independent release, Wolves. The first four tracks of the six-song EP have moments of brilliance, but at times they can feel a bit unfocused or unmemorable. The band really hones in on their craft for the final two tracks, "Wolves" and "Cadence," where they write compelling and thoughtful lyrics matched with an engaging indie rock/post-hardcore sound. It might take a few listens to really sink your teeth into this EP, but for fans of the genre, Wolves is worth your time and money. - 5/9/17 Christopher Smith