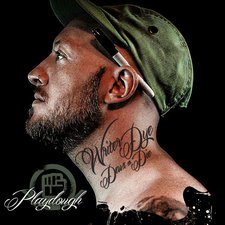 Two years ago, Dallas rapper Playdough teamed up with For Beats' Sake to release a free mixtape called Writer Dye. Each track was inspired by a different song from ten of Playdough's favorite artists, ranging from De La Soul to Nirvana. This year, Playdough is adding a second entry into what is now the Writer Dye series. Writer Dye: Deux or Die continues with the same idea as the first entry, featuring tracks inspired by artists like Coldplay, Queen, Bon Iver, and more (and it only takes one look at the song title to figure out which artist it's from).

A quick disclaimer: the physical copy of Writer Dye: Deux or Die features two bonus tracks that you can only get on disc. The digital copy, whether you pay or download it for free, will only feature ten tracks. This review does make some mention of the bonus tracks.

As I mentioned, the first Writer Dye featured the highly-skilled production talents of For Beats' Sake on each track. An entire album of FBS production is always a terrific listen, and I would've loved another joint effort from him and Playdough, but for Deux or Die, Playdough brought in a slew of producers and DJ's for the beats and cuts, some the average Christian hip hop fan will know, as well as some they may not. For Beats' Sake did produce two of the tracks, "Mouse's Modesty" and "Geez Lou Weezer." With a lot of soul influence, you can always count on FBS to create something magical, and he doesn't disappoint with his tracks here. GrandRiggity is responsible for four of the beats (including the fantastic beats in "Cash Rules Everything" and "King of Queens"), with others done by M. Slago, J. Rhodes, Knowtalentva, pumpkinFoot, OhNo, and humble beast Theory Hazit. In addition, "Mouse's Modesty" and "BeatleJuice" feature cuts from inDJnous from Technicali and several others get cuts from longtime Playdough cohort, DJ Sean P. One of the hottest tracks on Deux or Die, which is also the first single/music video, features some of the most perfect and fitting scratches and samples (from Queen and the Beastie Boys) I've heard in a long time.

Producers and DJs aren't the only guests that Playdough brought along for Deux or Die; three of the tracks feature other emcees getting their rhyme on. The first comes in "Stroke of Genius," with a highly influential, yet not very well-known, emcee who goes by the name Copywrite. If you haven't heard any of Copywrite's music before, his verse here will make you want to check it all out. He makes mention of our current hardships ("I represent white people with bad credit, and mad debt, it doesn't matter who's in office, it's pathetic") and our constant fight against temptation ("Me and Playdough on the mic trying to rep the Lord, devil's moshing in the crowd trying to get the cord"). Von Pea comes in on "From A DigablePlanet" and sounds right at home on the beat rapping about the neighborhood he came from. The third and final guest emcee is in "Jon Bon Iver." Adeem's style is similar to that of Jay-Z and he quickly and easily becomes my favorite guest spot of the three on Deux or Die.

Playdough himself is one of those artists that noticeably gets better with each and every release. He creates a nice balance of classic hip hop and modern hip hop, simultaneously paying homage to his forerunners and paving the way for those to come long after he puts the mic down for good (if that ever happens). First off, he stretches himself a bit in that he does a lot more singing than usual. Several of the songs feature Playdough singing the some small parts, such as "Mouse's Modesty," "Beatlejuice," "Bob Dylan," "Kenny Analoggin" and more. A good portion of "Cash Rules Everything" features sung lyrics, as Playdough sings several verses of Johnny Cash's classic "Ain't No Grave." The beat is melancholy and piano/organ-led as he sings "Look way down the river, what you think I see, I see a band of angels, and they're coming after me, cause ain't no grave can hold my body down...Meet me Jesus meet me, meet me in the air, and if these wings don't fail me Lord, I'll meet You anywhere, cause ain't no grave can hold my body down." The raps come in afterward as he offers up everything for God to take. What I find interesting is where most of the tracks feature lyrics borrowed from a song's hook (or maybe a bridge), "Cash Rules Everything" is one of two songs that uses more. The second song is next on the track list; "King of Queens" almost works as a cover of Queen's "Bohemian Rhapsody." It's almost opposite of the rest of the songs, as the song is made up of rearranged Queen lyrics with a Playdough-penned hook ("Writer Dye, but I need somebody to ride for me, Beelzebub got a devil set aside for me"). The Freddie Mercury and Beastie Boys samples work gloriously with the beat, aiding in making "King of Queens" a doubtless highlight of the bunch.

Playdough's rhymes on Deux or Die are slick and nearly untouchable. Some listeners attribute "being a good rapper" to how fast you can flow; Playdough rarely relies on quick flows in his songs and is one of the best in the game, showing that there's more to it than just speed. "Cold N Play" is an excellent opening track; I love his mix of conviction and satire in the lines "Pass the plate, I'm trying to represent, and tithe knowledge but only give ten percent, but give a cool fifteen to the waitress, but twenty if she does a good job on the basics." In the digital album's closer "Jon Bon Iver," he takes the idea of "skinny love" (the title of the Bon Iver song he borrowed) and applies it to his moments of weakness ("The thing about my love is I can see it getting skinnier, spirit getting colder, the temptation getting prettier"). Instead of just making his hooks out of other artists' lyrics and leaving it at that, he takes their concepts and makes the rest of the song fall in line.

Playdough's album Hotdoggin' was one of the best hip hop albums of 2011, and it's clear that he strove to make the second Writer Dye installment even better. While it's hard to say if it's better than Hotdoggin' or not, it's easy to say that it improved upon the first Writer Dye, and it's a highlight amid his discography. He continues to outdo himself on a regular basis, and there are only better days ahead for "the greatest emcee in the world." Unlike the first Writer Dye, this mixtape is not a free download, but it's considerably inexpensive given the quality and track length. If you're one of Playdough's road dogs, don't sleep on this. If you don't know him, Writer Dye: Deux or Die is the perfect opportunity to change that.