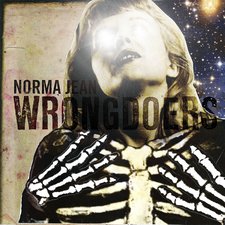 I jumped on the Norma Jean bandwagon a few years ago when they released Meridional, and their sound changed considerably. Many would argue beside me that they improved immensely, adding flow, structure and melodic integrity to their style, though there may have been just as many who jumped off the wagon and ran to The Chariot's for reassurance in their love of chaos. Although Meridional was somewhat of a successful attempt at mastering what they tried in The Anti-Mother, the same intense progression can be said for their sixth studio album, Wrongdoers.

If a summary of the album's essence could be described, the seven minute opening track "Hiveminds" probably comes closest. A track that is so full of meat that seven minutes is nothing less than the perfect length; we hear little variation, yet it soars higher and higher, never even coming close to dull. As with the entire album, there is much less variation than Meridional or The Anti-Mother, but I think there has been a wonderful melting of their high points that has created a solid waxen blob that sounds effortless all the way through.

We still hear a few more chaotic songs like "If You've Got It At Five, You've Got It At Fifty" and "The Lash Whistled Like A Singing Wind" that hearken back to the old days, except that they sound much more polished. Adversely, there are tracks akin to Meridional that are much more radio friendly (ie. "Sword In Mouth, Fire Eyes"). But the real magic happens in songs like "Triffids," "The Potter Has No Hands," and the magnificent title track. Norma Jean has become more melodic and structured than ever before, but I can confirm that Wrongdoers has a heavier dose of Bless the Martyr and Kiss the Child than Meridional did.

That is the wonder of this album, if I can get it into words: There are discernable choruses and verses, but they are played differently every time we hear them come around again, or the words are switched up. In between, stringing them on and together are catchy, repeating riffs bolstered by grungy, syrupy bass. It mingles together in a way that there seems to be an illusion of structure, and then the next song, an illusion of chaos. A melting is happening here that I cannot for the life of me find a line between.

They have accomplished this mastery of themselves even while obtaining new members Jeff Hickey on guitar, John Finnegan on bass, and Clayton Holyoak on drums, leaving guitarist Chris Day the only founding member still in the band. Overtop of it all, Cory Brandan Putman has really come into his own as vocalist. His screams are so vibrant, effortless and chilling and in eerie choruses, his terribly unique singing voice is put to work.

As "Sun Dies, Blood Moon" marches on and caps off the album, I feel a masterpiece behind me. Long haul fans may not be too happy about this direction that The Almighty Norma Jean have taken as of late, but that does not decrease the skilful way they mixed together melody and bedlam, nor the emotion audible in every note, nor the dedication to dissimilarity from minute to minute.

Norma Jean is a band that has been evolving from the word 'go' Whether it be their early re-naming, the revolving door of band members, or their actual sound change from their chaotic metal beginnings to their more melodic present, things don't seem to stay the same for the band for very long. However, throughout the entire evolution they have rarely disappointed. 2013's release, Wrongdoers, is not an exception to this history. Songs like "If You Got it at Five, You Got it at Fifty" and "The Lash Whistled Like a Singing Wind" are sure to impress long-time fans, while melodic tracks such as "Wrongdoers" and album favorite "Sword In Mouth, Fire Eyes" are sure to attract newer listeners. Norma Jean promised a return to roots with this album. While they definitely followed through, some fans (myself included) may have been hoping for a little more of that old school sound. Wrongdoers is an album that, while it's not really like Bless the Martyr, it is more like it than Meridional was. The biggest disappointment of the record is the mild profanities (like "h*ll" and "d*mn") sprinkled in a few songs. For many fans, Norma Jean may never get better than Bless the Martyr and Kiss the Child and "Memphis Will Be Laid to Waste," but Wrongdoers is a concerted effort to please long-time fans stylistically while continuing their growth process at the same time. - Michael Weaver, 8/11/13