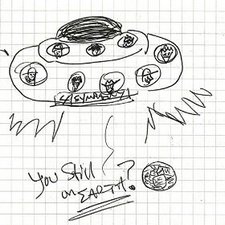 L.A. Symphony
You Still on Earth?

After 7 years of silence from the L.A. Symphony as a crew, they have returned with an album worth listening to. Uno Mas, CookBook, Sareem Poems, Flynn, Joey the Jerk, Pigeon John, bTwice, and J-Beits have reunited to bring an album that hits as hard as their previous recordings, if not harder. The production on You Still on Earth? is a huge step up from their previous recordings, and is not something to sleep on. The tracks are each beautifully produced and the beats work well with each track. This album does not disappoint.

You Still on Earth? opens with "Pheonix." The whole crew raps an intro track about their return. They have a lot of fun rhymes, but if you're looking for deeper lyrics, you won't find it in this song. There is a lot of bragging, which seems to be a recurring theme in their lyrics. However, it is still an enjoyable listen. The beat is hard, and the strings add to the mood of the track. The next track, "Penny Loafer," features Tunnel Rat Zane One. She does not rap her own verse, but rather, raps the chorus. Once again, this track does not have much depth, but it has a lot of fun rhymes, metaphors and wordplay. This song is also somewhat enjoyable. It is not the weakest track on the album--and to say that it is weak is to discredit it--however, many of the other tracks are better than this one. The next track is "We Out There." This seems to be the 'title track' as they rap in the chorus, "You still on earth? We off that." There is a cool space-esque vibe in the beat. Again, this is a brag track, with little depth. As consistent with all their tracks, there is great wordplay. For example, Cookbook spits, "If you a meth addict, then I'm a science teacher; slinging crack music, we supply the ether."

The first deeper track is "Swallow," where they sing in the chorus, "it's a hard life to swallow." This track talks about how life can get tough. The next two tracks are two of the deeper ones ("Love is the Revolution" and "Dope"). "Love..." has a cool chant-type chorus. The claps in the beat add for effect, and the horns really add to the mood. The beat is well done in this track as well. However, it is more pop-oriented, so some fans may not enjoy this track. "Dope" features J-Beits, bTwice and Pigeon John, and is a testimonial type song where they rap about their experiences with dope and how it did more harm than good. The beat hits hard. The next track, "Shut it Up," has what I think is the best production. The lyrics are talking about their experiences as rappers versus what new rappers/aspiring rappers are talking about, and what they believe rap is about. "My Lady" is another deep song. The vibe on that is very smooth. The verses thank and praise different ladies in their lives, whether it be a wife or a mother. "Wonderful World" opens up with what sounds like something from a classic, old-school movie; this is another brag track. Another song to note is "Sometimes." On it, Uno Mas spits, "...Life is like a bullet tryna take me down; Ain't nobody show me pity, every man for themselves; And if you have some sort of beef, keep it all to yourself." Arguably, the best tracks are "Nightfall (ft. Candice Brown)," "In L.A.", and "Las BBQ." "Las BBQ" is made to sound like a fun, backyard barbecue cypher, with each rapper spitting their own short verse, and then calling up another one to the mic.

Now for the ugly. The tracks "Another Level" and "Space Boots" are the weakest tracks on the record. "Another Level" is very whiny, and "Space Boots" is harsh to the ears. It is very cacophonic, if I can say that. Furthermore, and I saved this for the end, there are a number of uses of the "N" word ("n***er"), mainly from Pigeon John. Also, a lot of the tracks are braggadocios, and in a number of cases, they rap about how they can get women. If you are looking for something deep like Lecrae, L.A. Symphony is not for you, although I still encourage you to at least give this album a listen. Musically, this album still contains the same underground hip-hop sound that their previous albums contained. If you are looking for a more mainstream sound like Lecrae, you may not enjoy this album. You Still on Earth? is a step up from their previous recordings, and the majority of the tracks are very enjoyable. There are a number of tracks with deep lyrics, so for those looking for something with depth, you may want to only buy select songs. This album is only available on iTunes, so anyone who still buys physical copies of CDs (I do) will waste their time looking for one for this album. For old L.A.S fans, this is a must-have for your collection. L.A.S came back hard, and did not disappoint.