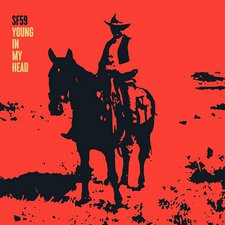 Starflyer 59
Young In My Head


Jason Martin, aka Starflyer 59, is back in 2019 sounding weathered, and more than a little weary; with more ruminations on life, love, and loss. Young In My Head, the newest offering from the band, is dripping with nostalgia, and to their credit, this is in no way a detriment or knock-off of their influences. Sounding both familiar and fresh, they pull off this tricky balance with ease. Martins throaty baritone matches the thumping bass lines of opener Hey, Are You listening? quite well as he achingly asks, vulnerably, Hey, are you listening?/Are you near or far?/Now I just dont know who you are/And I dont care anymore. Its a song full of longing and open-ended frustration with a relationship he doesnt seem convinced is worth continuing to care about.

The title track, Young In My Head, follows, and lays out the thesis of the album very well with the chorus showing us where his head is with the lines, Now Im just young in my head/Where do I go to feel like Im there again?/Now Im just young in my head/No time for wasting mine, for wasting mine. He very directly tips his hat back to their breakout hit Blue Collar Love from twenty-five years ago, with the track Remind Me, which takes a plodding pace and morose musical approach. Another reviewer pointed out its resemblance to the Twin Peaks television show soundtrack, and that was the exact memory that escaped me the first few listens. Its likely to be one of the more polarizing songs on the album, and to this point, Im still undecided on my final thoughts. Suffice it to say, its interesting enough to stick with over several listens. Another highlight is the guitar driven, and very hooky, Smoke. Though not a certainty, the songs lyrics work with multiple interpretations, both literal and figurative. He growls the chorus lines, Smoke/It takes up my days/It fills up my nights/Controlling my brain/Why do I do what I do/I dont know man. On one hand, the smoke he is referencing could be quite literal; maybe a lifelong struggle with the habit. On the other hand, it could be metaphorical for his pursuit of attention and fame, (AKA smoke) through music. Either way, the lament of Apostle Paul in Romans 7:15, reverberates loud and clear.

The last four songs on the album continue to address relational issues with Wicked Trick and Junk seemingly directed at a lover, or perhaps a friend. Song Cain could be addressing a romantic relationship gone bad, or maybe even a father and son relationship. He concludes the all-too-short album with Crash, where he has a realization that, I told you your mistakes/And you made me realize/That everyone can crash/And I saw all my mistakes/And it made me realize/That everyone can crash. It would appear that through the journey of relational mistakes and regrets, he has come to recognize his own culpability, producing some much-needed perspective. Over the course of this tight album, the greatest criticism that could be that tracks seven through nine begin to blend into each other a little bit. Even with that said, no song is entirely missing something of interest. One example of this is Wicked Trick, which has a tasty guitar lick in the verses, though the chorus fails to follow through with the promise that begins the song. Outside of that, the sparsity of lyrics within most of the songs may bother some, but this reviewer found it easier to appreciate the bones of every tune due to their simplicity. Overall, this really is the rare album that is solid all the way through.

Young In My Head is a succinct and cohesive look at a season in one mans life where he is longing for days gone by. Its deeply relatable to any of us (this reviewer included) that have a good portion of their life in the rearview mirror. At times it does wallow in feelings, though it never comes across as completely devoid of hope. Martin has peeled back the curtain of his heart, and in so doing allowed an open invitation for listeners to hold a mirror up to examine their own. This is a masterclass in writing, from a veteran of the industry who has produced an 80s new wave drenched album of songs both accessible, and profound. All in all, this set of songs is a perfect soundtrack for trips down memory lane. Jason Martin has bestowed another in a long line of excellent albums upon the listening world, and it is not to be missed.