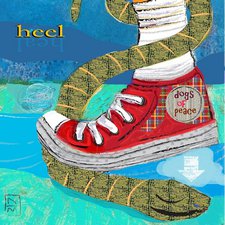 
Dogs of Peace released their one and only album in 1996. Perhaps their name only sounds vaguely familiar to you, but there's no doubt that you would recognize the album cover if you spent any time in a Christian book store in the mid-90's. Their debut album was entitled Speak, but now twenty years later, they are back for their follow-up, Heel -- again playing off of their band name to title the record. So what does a band sound like that features the former bassist from the Imperials (Jimmie Lee Sloas) and guitarist from Whiteheart (Gordon Kennedy)? Well, Speak had a 90's alt/rock feel with some classic rock elements with many comparisons to Pink Floyd. However, Heel leans a much more heavily on the classic rock (70's era) side.

"One Flight Away" opens the record on a very positive note. The mixture of the main riff, some open and airy moments, and some strings sets it as a wonderful opening piece with a classic rock vibe. "Sacrifice" follows the strong opening number with a piano led track that walks the line between 70's and 80's with some electronic elements thrown in for effect. "Dark Without" continues a positive trend with nice harmonies in the verse coupled with an edgier rock riff for the chorus. One of this reviewer's favorite tracks is up next in the acoustic "If It Weren't For You." The most interesting, and possibly most entertaining, song is "All This For a Piece of Fruit." The lyrics revolve around the fall of humanity, but not necessarily just Adam and Eve. Kennedy sings, "All this for a piece of fruit? A serpent's wish for a twist of truth. We got applesauce on our birthday suit." While the song sets a bit of a silly backdrop, it still works. A couple of spots later is another album highlight in "Friend of the Groom." More 70's inspired rock floods this track with a great groove and a nicely timed guitar solo. The lyrics are an obvious reference to Jesus being called a groom upon his return. "Healed" is an Eric Clapton flavored piece with smooth guitar fills, great harmonies, and a nearly one-and-a-half minute guitar solo to close it out. It doesn't necessarily call to mind "Change the World" (which Gordon Kennedy helped pen), but it's most certainly reminiscent of the master that made it popular. "He's the Light of the World" is another solid addition and an album favorite as Jesus is praised in the lyrics as "the light of the world." While it's almost become cliché to cover "Amazing Grace," the Dogs' instrumental version is really enjoyable and plays a little more to Jimmie Lee Sloas' gospel and country music background. The album finally closes with the iTunes bonus track "Crush." Overall, this could easily be considered the best song present on the entire album and the super catchy chorus helps to push it along. The music is still rooted in classic rock, but it's arguably the most modern sounding song. It's also very likely the most accessible to new listeners.

While Dogs of Peace took a twenty-year hiatus from releasing their own music, they haven't been dead in the water. In fact, just the credits for Gordon Kennedy and Jimmie Lee Sloas alone are far too many to cite -- not to mention drummer John Hammond, keyboardist Blair Masters, and producer/engineer Jeff Balding. If you are wanting something fresh to listen to, Heel might be something you should avoid. These are "old dogs" and they aren't going to give that modern rock fix you're hoping for. Fans of Speak, classic rock, or those currently enjoying Steve Taylor's revival, however, are all prime targets. Great musicians typically make great music and Dogs of Peace are no exception. Hopefully the guys decide to stick around for more than one album this time around.

With Heel, Dogs of Peace have blended 90's alternative rock with elements of classic rock, making a coherent and refreshingly timely album. Strong acoustic and electric guitar hooks are accompanied by layers of beautifully woven instrumentation to create impressive dynamic musical backdrops. The skilled musicianship is matched with Christ-centered lyrics that speak boldly about Jesus' sacrifice on the cross and our hopelessness without Him. Every track is a potential favorite and each offering something unique and memorable--whether it be a specific instrument (such as cowbell on "All This For A Piece of Fruit) or all-star guest appearances (such as vocals from Joel Hanson of PFR on "He's The Light of the World"). Perhaps the best song is the sinfully short "If It Weren't For You," with its irresistible Greek-influenced acoustic guitar hook and reflective lyrics, "There is me the self-made man / There is me without a plan / All of I that I can stand / If it weren't for you." Overall, Heel is the kind of album that has the ability to appease die-hard fans, fans of the genre, and people who don't normally listen to the genre. Don't miss this instant classic from these industry veterans. - Review date: 5/18/16, Christopher Smith