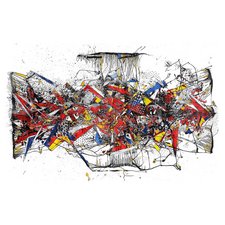 
An album with no name sometimes tells more than one that does. [Untitled] is, as its chaotic artwork implies, a record with no focal point or thematic cohesion. Its ideas and concepts are sprawled across the canvas of a broken mind and conveyed through a varied array of characters (some real, some fictitious) and personalities just as insane. It feels like a complete experience, yet it ends as abruptly as it began, leaving an ambiguous question hanging in the dusty air. Such an unstable and violent record almost comes as no surprise for those who have closely followed mewithoutYou's prolific career up to this point. The band's previous LP, Pale Horses, drew quite heavily from apocalyptic themes and the bleak existence that follows such a heartrending portrait. One only needs to hear "Rainbow Signs," a painful lament on the loss of Aaron's father that culminates into one of the most heartstopping moments of music in recent memory. [Untitled] can be interpreted as a harrowing look at the aftermath of the figurative nuclear strike that closed the previous record.

The apocalyptic themes couldn't be clearer than on the title of the record's explosive opener, "9:27 a.m., 7/29." A number of disastrous events occurred during the 29th of the 7th month, including, most notably, the destruction of the first Jerusalem Temple and the establishment of Hitler as leader of the National Socialist German Worker's Party. The song begins with a sludgy, droning guitar and steadily building drums before Aaron's fierce scream cuts through the noise. Not since the band's debut, A -> B Life, has mewithoutYou sounded this visceral and angry. This is followed by a masterpiece of a song called "Julia (Or 'Holy to the Lord' on the Bells of Horses)." Aaron's vocals are muted and detached as the thunderous instrumentation screams over him. Lyrically, the song draws heavily from passages of Scripture, such as Revelation 14:14-20 ("Another harvest moon- So many ways to lose / So many faiths") and Zachariah 14:20 ("Holy to the Lord on the bells of horses") and explores themes of doubt, the question of faith, and our limited understanding of God ("Safely on the shore we sank like stones / To the bottom of a made up ocean").

Following the short but viperous "Another Head For Hyrda," the record begins to delve into slower, denser musical territory that is no less intense. "[dormouse sighs]" has a build that is as unsettling as it is gentle, following a lamb awaiting Christ's return as the world around him signals imminent destruction and the abolishment of his religion (BURNING BOOKS: "Fire and a flood / There's power in the blood of every little lamb / Wonderworking power"). Historical characters are portrayed in "Flee, Thou Matadors!" as symbols of Aaron's conflicting desires while ominous instrumentation carries frantic verses and an infectious chorus that recalls Ten Stories' more playful style (while somehow making the contrasting styles work together). A delicious bass groove makes "Tortoises All the Way Down" an immediate highlight after an already beautiful yet despondent introduction and "2,459 Miles," while an apparently weaker inclusion at first, due to its more unassuming approach, slowly reveals itself to be a gorgeous and essential piece in [Untitled]'s yet to be closed narrative.

Rather than softening the emotional intensity for the closing quarter of the record, [Untitled] leaves its most stunning stages for last. "Wendy & Besty" is arguably Aaron's most brutally honest piece to date as he shares how his own personal conflicts and beliefs could potentially bring harm to others ("Tell your parents it's true / Though I'd never physically hurt you / I do know some Arabic prayers / But I left what was left of my self-respect / Like a Swiss army knife on the ground / And a pocket of coins at the IDF checkpoint") before letting everything out in a breathtaking barrage of impassioned screams. "New Wine, New Skins" comes as a melodic treasure that poses the question "'God's will' or 'come what fortune gives'--- Or is this truly how you'd choose to live: Managing the narrative?" It's an all too real look at how people corrupt religion in the pursuit of wealth and the justification of selfish desires. At the end of it all, "Michael, Row Your Boat Ashore" is [Untitled]'s deeply affecting centrepiece and one of the most mysterious and unsettling songs to come out of the past few years. Musically disorientating and lyrically gut-wrenching, it details a personal conversation between Aaron and his brother about the shortcomings and broken condition of themselves and everyone around them ("Michael, won't you row that boat ashore? / Your little brother can't paddle anymore!.....Have you heard from heaven today? / Tell me then, what'd Gabriel say? / Am I still on that narrow way?") The record's closing moments on the solemn "Break On Through To the Other Side [pt.2]" repeat the tired but hopeful refrain "Someday I'll find me," before leaving the listener in silence.

MewithoutYou's latest project is nothing short of a masterpiece. It's an opus that comes around only once in a lifetime and is, for this reviewer, arguably one of the most memorable records of the entire decade; a rollercoaster of emotions that often leaves you with your mouth on the floor and your heart in your throat. It's truly spectacular.