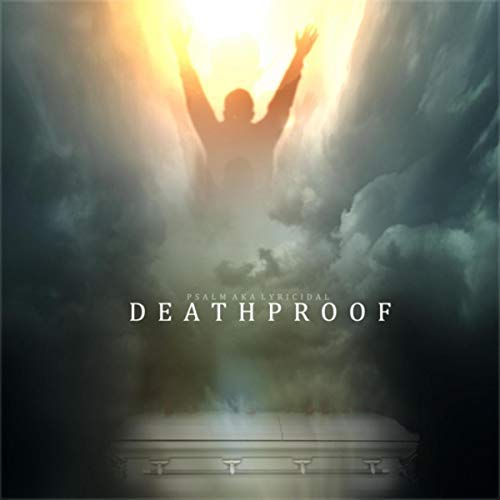 
Armed with a superb rapping ability, an inspiring testimony, and a large collection of songs that document his spiritual journey, David Andrew Byrd (aka Psalm, aka Lyricidal, formerly known as Sketchy Waze) released his 2016 album, Covenant, a hard-hitting and eclectic 78-minute work of raw, old-school rap tracks that left many impressed. One of the best things about Covenant was how fresh it felt; it was pure underground with virtually no influence, either lyrically or musically, from the common trends seen in the greater Christian hip hop community (since Psalm had heard little from that arena). However, in order for a truly successful follow-up album to take place, a few things (such as length and focus) would need to change and be refined. Enter Deathproof.

What is offered on Psalms sophomore album is a more traditional and listener-friendly album with a much more reasonable length of 15 songs spanned over 53 minutes, and featuring a cleaner and more consistant production style. While the raw, underground-type sounds and samples of Covenant are virtually gone, any fears that this elimination has diminished the things which made Psalm so good should be dispelled. Sure, you wont get the type of emotional, blunt, or gritty songs such as Everything You Wanted or Life of a 20, but what you do get is something a lot more mature and in-depth. Beginning with Long Way Back, Psalm sets the listener on a musical journey, almost concept-album like, though it probably isnt as accurate to say Deathproof is a concept album as it is to say each song is a variation on a theme (specifically a prodigal theme).

Long Way Back is an extremely effective opener, setting up the piano and orchestrations that will be heard throughout the album, as well as Psalms skilled, hard-hitting verses and singable choruses (So youre running through the night and you want to do whats right / And you stay right through the fight, but you dont know just who youre fighting / Now who you running from? Ashamed of what youve done? / but you dont have to block the sun my friend, just let some light in / Oh, its a long way back from here). Walking Dead is another highlight that has more of that underground feeling from Covenant, and features some of Psalms most impressive spitting on the album. Frontline, Good Over Bad, and Give It All Away are all very memorable tracks, and despite employing the slightly cheesy metaphor of breaking up with Satan, The Break Up is a pretty fun track, too. Later on in the album is the triumphant and melodic Call The Name, which may be Psalms most joyful and commercially friendly track on the album (So no matter what you go through, theres a time this truth to hold to / Call the name of the one who holds you, call the name of Jesus). And then, to close up the album is a rather curious track in Fresh, which upon the first few listens feels like a bonus track by the shift of style and tone. Instead, it actually serves as an excellent companion track to the opener Long Way Back in the way they contrast with each other (but even then, Call The Name feels like a much more satisfying conclusion track to the album, and I always feel like it is wrapping up when I hear it). Perhaps the only track that feels like real filler is Only Way, a rather short and almost interlude-like song that unfortunately bears the misfortune of following Call The Name.

While lengthy samples and pop song clips have gone by the wayside, one thing that Psalm has carried over to Deathproof is lots of features and guest rappers. There are ten other rappers that step up to the mic, and like Psalm himself, most of his guests are lesser-known underground artists like Seckond Chaynce (who stars on Walking Dead), Triple Thr33 (who shares time with Psalm on another fun highlight in Mask), or Bryan Trejo (who is featured on the albums prayerful lead single, God of My Soul). In fact, of the twelve tracks in the middle of the album, ten of them feature a guest rapper. Probably the best function of these rappers comes with their ability to provide diversity and variety in the midst of an album that has a rather consistent sound and feel from start to finish. The best features probably comes from NAK in the theatrical On My Face, or Jesse James on the aforementioned Call The Name.

Deathproof certainly isnt as personal, hard-hitting, or immediately resonant as Covenant was, but it is probably a better album as a whole. I could see a few people being a bit disappointed by most of the tracks following a similar structure and style, or even go as far as saying the album sounds repetitive and uninteresting, but repeat listens will surely lessen that feeling as listeners start getting more invested in the lyrics and themes of the album. It isnt surprising that Psalm focuses so much on grace and forgiveness on this album, and about turning around from a life of sin, considering the testimony of not just himself, but also several other guest features. God has been able to do some remarkable work in Psalms life, as well as the lives of those around Psalm as a result of His work in him, and Im excited to see how Psalm continues to grow and share the Gospel through his work in the future.