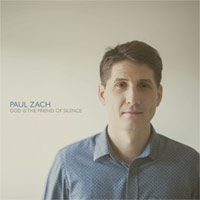 Paul Zach
God Is the Friend of Silence - EP


Consumerist culture teaches us that the adjectives "loud" and "instantaneous" have more value than the the word "silence." That is a concept more often associated with awkward lulls in conversation, moments of indecision, and boredom. In fact, this virtue is something that even the modern church has seemingly lost a grip on, which is likely why Paul Zach (one of the founding brothers of Remedy Drive) felt the need to construct a modest liturgy centered in silence. On his first solo EP, Zach utilizes folky ambience, lyrical pleas for minimalism, and a vulnerably live setting to remind us that God Is The Friend Of Silence.

At first glance, one might say that this work is yet another example of the acoustic folk that has ridden a persistent wave of popularity since the late 00's, but there are a number of distinct qualities here that demand the attention of the listener. Each track features a strong duo feel thanks to the presence of the lovely Liz Vice. The term "duo" here is much more befitting than simply labelling her lines as backing vocals - each of her parts are just as memorable and creative as Zach's. Just as necessary to the sound of this EP is the Bryant Park Quartet: this string quartet expertly provides the color and momentum expected of a dynamic rhythm section, effectively filling out the empty space when musically needed. The decision to record every part live together can be an intimidating one, but not one that producer Isaac Wardell isn't familiar with. In fact, every aforementioned individual was also a part of last year's Volume 1: Work Songs from The Porter's Gate - a fantastic album in its own right. The camaraderie that was fashioned during those sessions likely contributed to the solid production here.

Though the first two tracks are content to rest squarely within the description of folk, the final three tracks feature some musical surprises. "I Will Never Leave You Alone" introduces blues and even R&B influences. Zach's unexpected falsetto proves to be a test of his musicality (which he passes), and the louder chorus provides a necessary energy that is not present earlier on in the tracklist. Coupled with the surprising lyrical critique of the church coming from the perspective of the oppressed ("When they hide behind morals of their own choosing/And drown out your pain with their pious games"), this is the definite standout. The next tune, "For God Alone," feels grandiose and nearly cinematic, as the engaging trio performance and driving acoustic guitar build to a soaring climax. "East_West" concludes with a memorable hook in a chorus so bouncy that it's akin to a children's worship song. It's this closer that provides listeners with the most appropriate adjective to describe this collection of songs: pleasant.

Despite the intentional tranquility working really well and fitting the lyrical themes, these compositions do feel like they would be a lot of fun in a more full setting. The live nature of the recordings contribute to the noticeable amount of noise on most tracks as well as the occasional imbalance between the vocals. Still, these essential imperfections highlight the binary nature of silence as both peaceful and troubling. Zach is able to sing both "How long, how long will evil men drag me down?" and "We will cease from striving/And hear His voice within" because each thought features an aspect of silence that we must consider.

It would be very hard to argue against the stripped-down sound and the live setting of the EP, as they serve as the very design that this brand of worship is attempting to open our eyes to. Each song on God Is The Friend Of Silence helps to prove that corporate worship can be both beautifully simple and deeply thought-provoking, and that reason alone merits repeated listens.