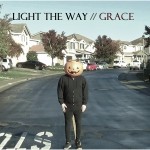 The three states on the west coast of the country all have a specific genre or image associated with it. Washington is the home of grunge, Oregon has whatever hipsters like, and California spawns ska bands and pop punk rockers. I think California wins.

Light the Way is one of the newest pop punk bands to come out of Northern California. In November 2016, they released their debut EP, Grace, which caught the attention of Brandon Jones and his newly-revived Indie Vision Music. With an indie label mindset in play, Jones and Light the Way joined forces to re-release the EP in January 2017, but this time with the IVM brand backing it.

Light the Way brings a classic, early 2000s-style pop punk to the table. Tracks like "Note To Self" and "I'm Sorry" are solid tracks that recall the time when bands like New Found Glory and Yellowcard ruled. "BRKN" even has a slightly harder Craig's Brother influence (even in the vocals a little), and it's just awesome. In a time where the music industry is pushing out pop singers and mumble rappers left and right, it's really nice to hear bands like Light the Way reviving a genre that really impacted listeners who actually cared about music instead of a brand or a fashion icon who just happens to sing. These three rockers also bring a message of hope in Jesus. Sometimes the quality of the lyrics isn't impressive ("I can never live up to the standards set, I fail every time, falling deeper in debt" from "BRKN"), but that's pretty normal for a new band, and those instances aren't too often.

In short, Light the Way is a band to keep your eye on. The runtime of their Grace EP is, sadly, pretty short, but perhaps it's just the band testing the waters and preparing a full-length record. If so, then I, for one, will be in line to pick it up. And if either you or the lovesick, angsty teenager inside of you long for the glory days of pop punk, Indie Vision Music and Light the Way have got you covered.