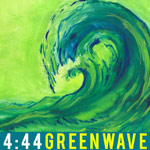 In the recent film, Sing Street, a young group of misfit Dublin, Ireland teenagers in the 1980's form a band and infuse it with the energy and verve that translates what it feels like to be young and passionate. The movie won rave reviews because it hit on that universal feeling of wanting a voice; of desiring to get what's going on inside your head and heart out into the open. Brimming with 80's, post punk and new wave sensibilities (think The Cure before they got overly pretentious, or a young U2), New Jersey's 4:44's debut album, Greenwave, reminds me of that film, and more so, what it feels like to have passion and a fire inside.

The opening, "Hallelujah" springs to life with a raw set of ringing reverb guitars, a pulsing bass line and a manic batch of drum fills. Sounding like a dispatch from London in 1983, "Hallelujah" is a great opening salvo of music and ideas. Over the cacophony of sounds, lead singer Anthony Friedlander intones a prayer of praise for hope in the midst of tragedy (a theme that is repeated throughout the album). "Hallelujah / I hear your voice / you're moving through me / you're talking to me / hallelujah / I heed the call / I don't need anything at all".

The manic, new wave energy and creative flare of "Hallelujah" continues in the second song, the oddly titled "Derf." Slower in pace, but equal in quality and energy, "Derf" sounds like a lost gem of a Cure song (and one of the better ones they would have written) and serves up a terrific story of grief and faith. "The Father's work will never be done / now teach my boy to be a man / and loosen your grip on your father's hand." Later in the song, Friedlander states that "still my hope is / that I'm going to be with you again / I'm not alone / but why must the darkness swallow the light?" "Derf" is an epic trip through a tragedy, and a startlingly mature look at the grieving process.

"Need No Tragedy" continues the theme of the song's title, and introduces distorted, swirly guitars to the mix, conjuring up feelings of confusion. The album's title track brings all the confusion and hurting into focus, with Friedlander calmly stating that "In life there is so much / with so little time to be true / so let the light cut out your darkness," and later, that one needs to "Breathe in the new year / and breathe out your doubt" in order to move forward in life.

After a few more blasts of punkish energy (including the wonderfully and strangely titled "Abba And The Big Bands"), Greenwave ends with the instrumental "Green" that nicely brings the album to a close, and gives a needed bit of time for introspection.

Being a young band, I have no doubt that 4:44 will rise above the early U2, Cure influences that wrap up Greenwave tightly. The album reminds me of the great records that west coast labels like Tooth & Nail and Five Minute Walk Records put out during my college years, and whose spiritual insight and energy still fuel me to this day. Greenwave is a great start for these New Jersey guys, and a great roadmap for how to navigate tragic times.