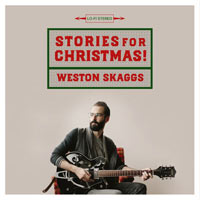 
Christmas albums and EPs are a dime a dozen during the holiday season, but the rarity in that subgenre is releasing a project with all original material. Although adding to the plethora of Yuletide offerings, Weston Skaggs' Stories for Christmas! delivers something different with an EP laden from front to back with his own work. No covers of overdone classics, no reimagining of a beloved hymn, just songs done in his own style featuring his own thoughts.

This facet of Stories works immediately to set it apart as something worth considering. In addition, Skaggs doesn't settle for a single style for his music but jumps around from shades of gospel and blues to styles in the vein of John Denver and Bob Dylan. The lyrical content bounces back and forth between songs focused on the Christmas story and tunes applying the spirit of the season beyond December (such as "Dickens Song" and "Winter Song"). He gives evangelistic calls in "Wise Men Still Seek Him" and "Prepare Him Room," while reveling in the season and ruminating on the meaning of Christ coming to earth in "Was It Really A Silent Night?" The musicianship on display carries a consistent quality, and he even throws in an instrumental track ("Snowscape"). The frenetic variety meshes well together and avoids coming off as too chaotic. Skaggs may play on different equipment in the playground, if you will, but he stays within the yard.

The uniqueness of this Christmas EP helps the listener look past some of its weaknesses. The songs that deal more with the Nativity story ("Wise Men Still Seek Him," "Bethlehem Town" and "Was It Really A Silent Night?") don't offer anything new in terms of retelling the tale, perhaps because so many other songs have given us a musical rendition of the story. However, Skaggs does use those tunes to highlight different aspects of the narrative not often examined, and elevates the tracks above others of their ilk. The "Skaggs Family Christmas" track, while interesting in concept, does nothing for the listener in terms of enjoyment. It is billed as an instrumental and it could have benefitted from some music playing in the background while we listen to a conglomeration of voices celebrating the holiday. There are also times when Skaggs' vocals get lost in the mix of reverb and other instruments. That technique is in right now and its use here will drive anyone looking for clear vocals (like myself) crazy. But the muddled vocals are limited and these weaknesses, overall, are minor bumps along an otherwise smooth road.

Stories for Christmas! is a solid seasonal EP that gives the listener something different to warm the cold December days. Even at its weakest, this project bears more weight than most and carries it well. Skaggs made a bold choice in doing all original tunes (including an instrumental track or two) and that decision pays off. If you only pick a few musical stories for Christmas this year, put Weston Skaggs at the top of your "nice" list. 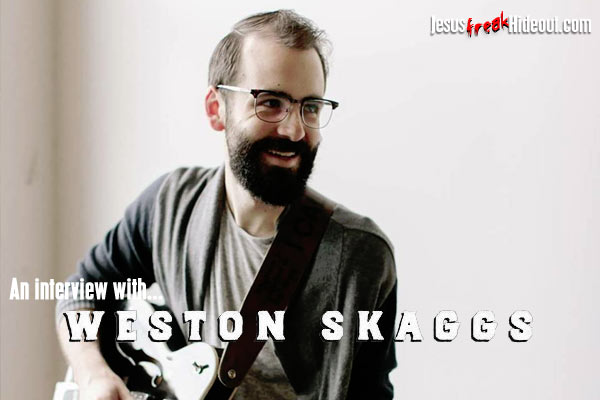 Weston Skaggs: Haha, the quick answer is "Yes, but not closely." My uncle met him after a concert once and they found we do trace our family history back to a pair of brothers who immigrated prior to the Revolutionary War. My ancestor moved to western Virginia and Ricky's to Kentucky territory. If someone could make the introduction, I do admire both him and also his daughter Molly is a talented artist as well.

Weston: I love Advent and Christmas and one of the biggest harbingers of the season is the shift in music. There are a lot of great classic albums that we all love but many would agree that a majority of Christmas albums being released today are so slick and polished that they really lack in nostalgia factor. Some of the greatest compliments I received on my 2016 album 'Joy & Sorrow Meet' were that it felt like a throwback album. We thought it a natural shift to apply the same sensibilities to Christmas.

Weston: If we were doing a full length project, then we likely would have done some traditional tunes, but we planned and budgeted to record six songs and then we ended up writing what we felt were six strong originals so we went ahead with them. And I also know that when it comes to a lot of traditional tunes I'd be competing with Nat King Cole or Dean Martin in your playlists, haha!

Weston: There is a certain amount of pressure, because we've all heard bad or forced original Christmas material. I spent all of the Christmas season in 2016 absorbing as much of the Christmas spirit as I could, knowing I'd be working on this project. I tried to break down as I listened to the classics we never tire of why certain tunes are timeless and moving and certain ones just don't 'stick'. Writing through the winter of 2016 while I was feeling all the feels really paid off because we had to track the album in August and it was 80+ degrees in the studio! I didn't feel pressure to write a hit, however. I just wanted to be true to my strengths as a writer and artist and produce the best version of my own strengths that I could. I feel like our team at Old Bear Records and Sprig Music allowed that to happen and that's satisfaction enough for me.

Weston: Response songs are very popular in the gospel music tradition and we (Chris and Anthony Hoisington - my writing partners and label mates) draw a lot on that tradition when we write. A call to repentance is something that happens frequently in the gospel music idiom and it is definitely de-emphasized in the way many approach Christian popular music today. The nativity is so comfortable for us. Its "cute". Its "nice". But the incarnation of Christ should be something that very much spurs and inspires change among the people who behold it.

Weston: That track is a fun little nugget that we mashed up impromptly in the studio. It has audio I pulled from a couple of videos taken on Christmas day last year with my Skaggs family and in-laws. One of the traditions my wife and I have is we put up our seasonal decorations the day after Thanksgiving, (and sometimes on a slow Thanksgiving day). Something that's becoming a tradition of ours is for my wife and I to race to get the lights out and up first. I love the big retro color lights and she loves the small twinkly white lights on the tree. so we try to put our favorites up while hiding the others. We always compromise by putting both on the tree but we play "fight" over which ones to use each year.

Weston: My writing partner, Chris Hoisington, brought the song idea to me to write around Scrooge's famous quote at the end of A Christmas Carol: "I will honour Christmas in my heart, and try to keep it all the year. I will live in the Past, the Present, and the Future. The Spirits of all Three shall strive within me. I will not shut out the lessons that they teach!" So I was motivated to write a Christmas song around the idea of keeping the wonder of the incarnation and the "Christmas spirit" in our hearts and minds the REST of the year, not just seasonally.

Weston: Thank you! Snowscape happened very organically with Jeremy Thompson (multi-instrumentalist extraordinaire) layering the steel guitar with a couple other sounds on the classic Mellotron keyboard that we have at Old Bear Studio. "Wintersong" came to me from two different instances. 1: I was watching a Discovery channel show on Antarctica with my kids and was blown away by the amount of life going on under the surface of the seemingly dead landscape. There's a whole ecosystem under the ice in that river. Thousands of creatures were surviving and thriving in what looked to my eyes like a frozen wasteland! Secondly, I was struck last winter by the stark deadness and emotional doldrums we can feel during the "dog days" of January and February. As I thought on this, I was driving and looking out at the dull monochromatic landscape of bare trees and snow. Suddenly I saw a group of kids in their brightly colored coats playing in the snow in a scene just bursting with color and joy and life. It really stuck with me and helped me to catch the vision for that song.

Weston: Thank you for that! This song definitely leaned into more of a folk tradition of using a simple tune and a little humour to pick at some truth. Oh boy, I'm all over the place with influences! Chris, who's also my producer, and I spend a lot of time sharing music back and forth to each other. Often its old gospel albums by The Chuck Wagon Gang, The Louvin Brothers, or The Staple Singers. Wintersong owes something of a debt to John Denver and Rich Mullins for it's scenic storytelling. Bethlehem Town owes a debt to The Grinch or any number of Broadway villain songs. We liked to say when we were tracking Wise Men Still Seek Him that we wanted it to sound timeless: as if it could have been recorded by Bing in the 40's, or Brian Wilson and the Wrecking Crew in the 60's, or Johnny and June in the 70's, or even up to Sufjan in the 00's.

Weston: After releasing projects the last two calendar years, I'll continue touring in support of them and will spend a lot of time writing for future project(s)!

Weston: Haha, snowball fight! Heights is not my thing so I'd have no interest being on that sleigh!