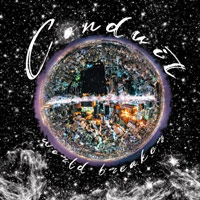 
Of all the rock genres and subgenres, metalcore can be one of the most rigid and predictable. But even though Conduit by World Breaker often falls into the normal clichés, the album has several unique moments that show the band has more up its collective sleeve than breakdowns, blast-beats and constantly throbbing kickdrums. The song "May Day," for example, begins with an interesting guitar hook that hints at something adventurous, but this great moment is soon swallowed up by the typical machinegun kick and roaring vocals. Intensity is great, but it often feels like overkill, especially during the first few tracks. Fortunately, tracks like "Beauty in the Rain" and "Wide on the Shore" have more time to develop, while "Star Breather" shows off the band's progressive metal chops. Hopefully, World Breaker's next release will show us more of what they are capable of, because, as lackluster as Conduit can be, it also shows the band's potential.
- Review date: 3/9/20, written by Andrea Hardee of Jesusfreakhideout.com