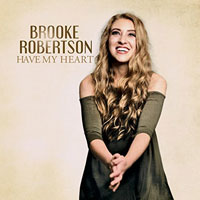 Brooke Robertson
Have My Heart EP


Christian music has been lacking younger female role models lately. Lauren Daigle stepped up to the plate big time, but for the past two years she has really been the only one to make a significant impact as a new artist. There have been a few others, like Hollyn and Lauren Alexandria, who have debuted with good music, but have yet to receive the same level of traction as Daigle. Within this context, Brooke Robertson is poised to make her grand entrance onto the scene with her EP, Have My Heart. While this is an independent release, the production and quality of the music is on par with a label-funded album, and it's getting good press coverage. Robertson's debut EP is a pop album at heart, mixed with elements of singer/songwriter, acoustic pop, and modern worship. The first three tracks are relaxing and upbeat (with the title-track being a highlight), while the fourth and final track, "I Am Yours," is an epic ballad. The aesthetic music sets a nice tone for the centerpiece of Robertson's sound: her vocals. Not only are her vocals pretty, but she has the talent to match. Rather than relying on powerhouse vocals to convey emotion, she utilizes the intricacies of her voice, which fits well with the music. The lyrics are all vertical in nature, some of which are talking about God, and the rest are more of a conversation with him. Criticisms for Have My Heart are minor, mostly that the lyrics and music can sometimes play it safe, and it's incredibly short, clocking in at a mere 14 minutes. On the bright side, it is just enough time to make you want to hear more rather than not really getting a good idea of what to expect in the future. Robertson has a tremendous amount of potential and it would not be surprising if this little EP became a pivotal moment for her to reach the ears and hearts of many.
- Review date: 1/4/18, written by Christopher Smith of Jesusfreakhideout.com