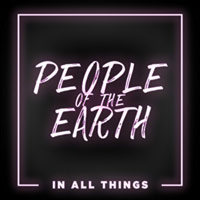 People of the Earth
In All Things


People of the Earth is a Kentucky based worship band specializing in worship tunes for pop music fans. Frontman/founder Dustin Fenison is already quite accomplished as a staff writer for Daywind Music Publishing (a HUGE outfit in the Christian music industry) and is one of the pastors at his home church. Their newest EP, In All Things, contains five brand new songs and another song that was released last year and featured on Vital Worship, Vol. 2. The EP sets out with a heavy pop vibe from the get go. "You Change Me" has a super slick pop sheen, but is undeniably catchy as Fenison sings, "You changed me" in the chorus. "All Belongs to You" slows the mix down and picks up a more standard worship vibe, but throws a few tricks here and there to keep it somewhat fresh. The title track keeps the poppy sound coming, but doesn't hit the level of "Wake Up My Soul" -- another infectious pop track. In between these two songs is the more interesting "Death Was Arrested." The song is fronted by Lydia Laird, but has Fenison joining with some nice harmonies. Instead of using the same old saying, "death was defeated" when talking about Jesus' sacrifice and resurrection, the group use the term "arrested" instead. It's a different way to indicate the same basic concept, but does manage to paint it in a slightly different light. The EP closes with the previously released "That's Who Jesus Is." The song is a much more standard sounding worship tune and smacks of an artist like Chris Tomlin. Fenison continues to sing of Christ's death and resurrection in describing just who Jesus is. It's a simple song with a powerful message, but it doesn't do quite as much musically to grab your attention like earlier tracks. In All Things is produced in excellent fashion and is a great sounding record from the studio. The production team clearly knew what they were doing and managed to release a very pop-centered album that isn't overproduced -- the downfall of so many pop albums. Fans of modern worship and pop music are certainly the target audience for People of the Earth. If you fall into either of these two categories you should find yourself very pleased with this EP. Dustin Fenison is an experienced writer and the top-notch production make this EP worth your time for a listen. This is a band that is primed to break out very soon.
- Review date: 7/26/17, written by Michael Weaver of Jesusfreakhideout.com