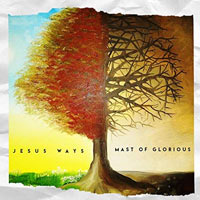 
Though not typical, it's not unheard of for artists to release music under different monikers depending on the genre. We've seen this in prolific artists like Cee-Lo Green (Gnarls Barkley, Gnarly Davidson) and Adam Young (Owl City, Sky Sailing, Port Blue). This same tactic is also being applied by Mosaic Rain Recordings artist Tre Carn, a songwriter who writes the lyrics that end up being performed by a different batch of musicians. Carn's newest single is called "Jesus Ways," and is being performed by a worship leader named Jay Long and a collective being referred to as Mast of Glorious. The song is a contemporary/pop rock song that brings to mind bands like Lost Dogs and Big Tent Revival, with lyrics that tell a story about two men crossing paths. One of the men soon reveals himself to be Satan, as he is blaspheming God and saying that destruction is coming and that no one can be spared. The singer is the other man, a believer in Christ, who denies the devil's lies, singing "You keep coming around giving Christians blues, doing all you can to test our faith, but we're too grounded in our Jesus ways, we're living praise." The song is a testament to the power we have over the enemy. The light sound and catchy melodies make for an upbeat and uplifting track that fans of contemporary pop rock (with a hint of the Jesus music movement) will greatly appreciate. I'm unsure if more music will be released by this specific team of artists, but I'd be interested in hearing more if so.
- Review date: 7/12/18, written by Scott Fryberger of Jesusfreakhideout.com