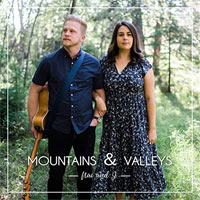 
Residing in Edmonton, Alberta, married couple Naomi and Joel Tanasychuk enter the Christian music scene in 2020 as Nai and J. Their debut comes by way of the increasingly popular EP format, and includes six songs, titled Mountains and Valleys. Describing themselves as passionate about worship and people, this couple set out to share their hearts with the world through music. What is quickly apparent early on is a felt sincerity running through each of the songs. Vocally there is a tight blend of their harmonies, making for a highlight thread throughout the six tracks. Musically speaking there isn't anything that stands out or above the usual modern worship soundscapes, but neither does it fall below that quality, falling squarely in pleasant territory. While this does leave some room for improvement to keep from getting lost in the sea of releases, this is a solid debut to build upon. Lyrically, there are a few turns of phrase worthy of an extra look, mostly from "It is Finished (East to West)" and "More Like Jesus," with the former being this reviewer's pick as top overall song. Also of note, is the slow-burn bridge from "In A Moment" that calls upon the name or Jesus to heal and conquer. It's a rousing and powerful point in the song that could have lasted longer, leaving me on the good side of wanting more, not less. As far as introductions go, duo Nai and J make a good first impression, even if a few moments fall victim to lyrical cliche. While Mountains and Valleys isn't an album for everyone, it is the perfect set of songs for those in search of passionate and earnest pop/worship tunes in the vein of All Sons & Daughters.
- Review date: 12/8/20, written by Josh Balogh of Jesusfreakhideout.com 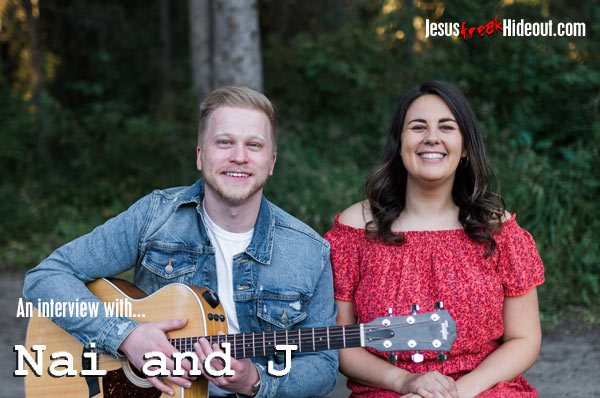 Joel Tanasychuk: Naomi and I (Joel) met at a Christian camp in a small town called Caroline (Alberta, Canada) in June 2016. One of the things that we bonded over very quickly into meeting each other was our love for music. We were already actively involved in our respective church's worship ministries, and already writing songs individually. Our involvement in the camp's worship music, and having worship jam sessions together was one of the huge building blocks in our relationship.

Joel: The hardest thing for Naomi to adjust to (and still is!) is being away from her family who live in England. We miss them lots! For me, I would say one of the biggest adjustments was stepping up to the plate in regards to certain household tasks like vacuuming, dishes, etc... I feel fortunate to live near family in Edmonton (Alberta, Canada).

Joel: What a great question! Naomi is re-certifying this year at the University of Alberta, so one of the big changes for her has been taking part in online Zoom calls instead of going to classes in person. For me, this school year has been very interesting. Teaching with a mask on, and teaching to students with masks on has probably been the strangest/hardest thing. I would say the most pleasantly surprising would be how well my particular group of kids has dealt with all of the many changes. They are a wonderful group!

Joel: In songwriting, I (Joel) find that inspiration quite often strikes at the strangest time. The bathroom, in the middle of teaching, while playing video games, etc... inspiration often comes when my mind is focused on something else, or I'm not focusing on anything really at all. For the both of us, I would say that life experiences, sermons, and the Bible are incredibly inspiring. One of the songs on our album, Wonderfully Made, was actually written out of a sermon that I listened to!

Joel: For Naomi, she finds that melodies come much easier than lyrics, and I'm the opposite. Naomi will quite often get a melody come to her while one of us is playing through a chord progression, and I will quite often have a phrase come into my head which helps lead me into writing songs.

Joel: We have been listening to Maverick City Music, Steffany Gretzinger, Cory Asbury, Bethel Music, Phil Wickham, Gable Price and Friends (a recent artist discovery through a friend this year.... they're so good!), Elevation Worship, our stuff (Nai and J) and so many more!!! There's so much incredible music to listen to right now!

Joel: Oh man, what a question. There are so many. We would say Build My Life by Housefires. The very first time I heard that song, I was wrecked. Absolutely wrecked. It is such a good one.

Joel: Similarly to #7, Maverick City Music has been a huge recent fave. Others include Bethel Music, Hillsong Worship, Housefires, Vertical Worship or Shane & Shane. But seriously, there are so many others that are amazing.

Joel: We hope that anyone who stumbles upon this email interview, and decides to listen to our music would be impacted by it, and drawn closer to Jesus through it!!