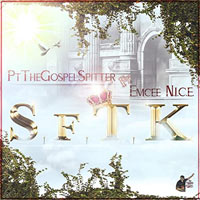 
Ashante PT Stokes (aka: PTtheGospelSpitter) is a Christian hip-hop artist and actor who has a radio chart topping single in "Praise the Maker" and released a new single ("Salvation") earlier this year. PT is back in December 2020 with his newest single, "SfTK" (Service for The King), which features Emcee N.I.C.E. PT, an Atlanta Native, meets up with Emcee N.I.C.E. (Los Angeles) for a little east coast/west coast collaboration on this new track. "SfTK" is an upbeat dance inspired track that would be perfect in a club type setting. It has a catchy beat that will certainly get your head nodding along. Lyrically, the track focuses around living for the sole purpose of serving Jesus. PT repeatedly sings, "I only live to give service for The King; that' who I live for" in the song's hook. PT displays some nice skills, but the highlight of the song is when the beat drops out and Emcee N.I.C.E. begins his guest appearance, making for a great change of pace. The grittiness of Emcee N.I.C.E. gives the track a nice contrast to PT's more polished style. The track has a very different feel than the Latin inspired "Praise the Maker" and the slower R&B groove of "Salvation," but goes to show PT's overall diversity. If you're looking for a positive hip-hop song in a rough year like 2020, look no further that "SfTK." PTtheGospelSpitter and Emcee N.I.C.E. are great discoveries and a good reminder that we were made to serve the King of Kings.
- Review date: 12/18/20, written by Michael Weaver of Jesusfreakhideout.com