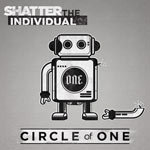 Circle of One
Shatter the Individual EP

Making their independent debut, an EP called Part of the Plan, in early 2014, Pennsylvanian rock band Circle of One is back at it in another attempt to shake the world and bring God's message to those who need it. Shatter the Individual is a three-song EP that brings a lot energy and passion from start to finish. With the opening track, "Raise the Dead," the listener is immediately captured by their sound, which combines traits from several different big-name rock bands (Christian and secular). The verses in "Raise the Dead" are rapped in a way you may have heard Rob Beckley of Pillar do so on Above with token rapcore-style music to match, while the vocals in the chorus are a spitting image of Chester Bennington of Linkin Park fame. The lyrics are directed toward someone who seems to be giving up in life, and is a call to come back to the Lord. The weak link comes in the second track, "Let Him Rise," which seems to borrow a lot from Skillet and is instantly forgettable, but it's made better by the EP's final and strongest song, "Like Ghosts." The vocals sound like they're coming through clenched vocal cords, but the band really owns the song as a whole. It's not a very original song, but the comparisons to other bands aren't as readily accessible, and it really screams for the band to use it as the starting point for writing new material. With similarities to the aforementioned bands, and maybe even a little Comatose-era Skillet, Circle of One has improved greatly upon Part of the Plan, but still has a way to go to really find themselves. Shatter the Individual is a terrific step in the right direction, though. With some focus on creating something new from their musical inspirations, Circle of One could do well in the larger Christian rock arena. - Review date: 10/17/15, written by Scott Fryberger of Jesusfreakhideout.com

Learn how to get your music heard at ReverbNation.com